Hasan Nurov is from Navzamin village in Khuroson district, Tajikistan. For generations, Hasan’s family, like many farmers in the district, grew cotton. However, over time, water scarcity and low cotton prices created a conundrum for farmers. Should they continue growing an unprofitable crop, or instead migrate to Russia, where there were higher paying jobs?

Previously, Hasan was famous for the cotton he grew on his 14-hectare plot of land. However, over the past ten years, Hasan had more losses than profits from cotton and sometimes he even considered giving up farming and migrating to Russia. Hasan reflected on his situation, “I’ve been growing cotton all my life. It’s a lot of labor for very little income. Add to that, the situation with irrigation worsened, rains have become unpredictable, and the decline in cotton prices disappointed me.”

Recognizing that he needed to make a change, in 2016, Hasan worked with the USAID-funded Tajikistan Agriculture and Water activity to pivot his agricultural products from cotton to vegetables, including tomatoes, cucumbers, sweet peppers, legumes, and sweet potatoes. Despite generating greater profits, however, Hasan found it difficult to regulate the temperature in his greenhouses. Keeping the temperature stabilized required the constant attention of two people and soil rotation was difficult because the greenhouses were stationary.

In search of innovation, Hasan contacted the USAID Agribusiness Competitiveness activity in Tajikistan, which is designed to introduce new agricultural methods and technologies to the region. Recognizing the difficulties that farmers like Hasan were facing, the activity partnered with a local company, Neksigol, in the design and roll-out of the first mobile greenhouses with an automatic ventilation mechanism in Tajikistan. Neksigol selected Khuroson district to demonstrate this new greenhouse design because it is 10-15 degrees cooler than the other districts in this region of Tajikistan. 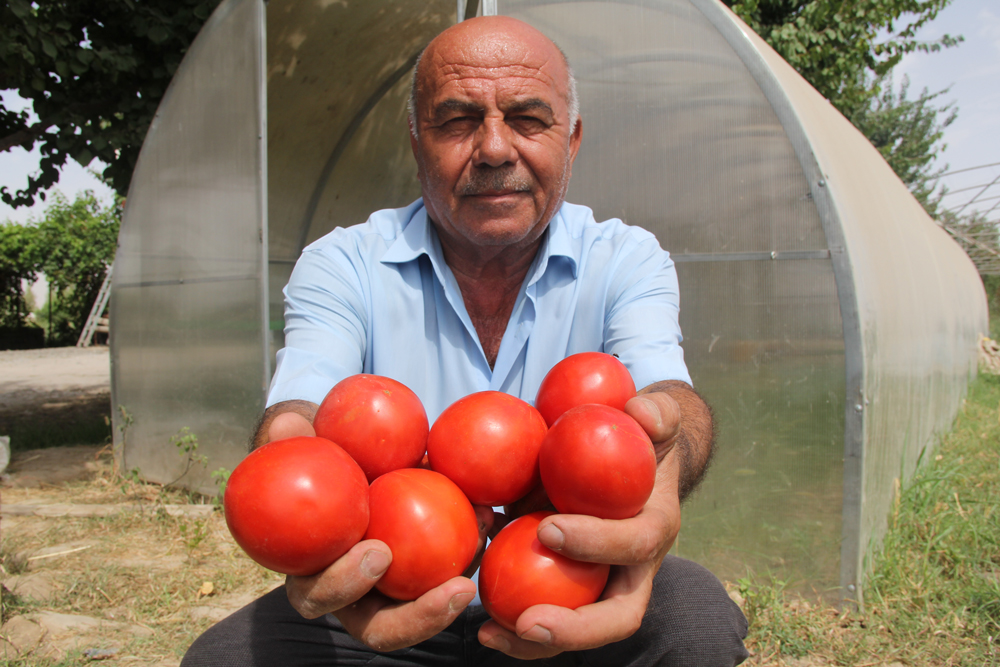 With support from USAID Agribusiness Competitiveness activity, Hasan received a mobile greenhouse in February 2020. The updated greenhouse design was made of light steel pipe, equipped with an automated ventilation mechanism, and has thick polycarbonate coating that protects crops from adverse weather conditions and fluctuating temperatures. Because it does not need a foundation and is easy to transport, the mobile greenhouse can be used seasonally, then dismantled and moved to another location.

Following the installation of the greenhouse, there were heavy rains in Khuroson district. Hundreds of local farmers experienced crop losses but Hasan was able to protect his crops. This was due to the added strength provided to the structure by the polycarbonate coating and automated ventilation system which made it possible to protect crops from adverse weather conditions of hail, rainfall, strong wind, and fluctuating temperatures.

“Auto-ventilation works around-the-clock and does not require electricity. I got an early harvest of tomatoes and was the first in the local market and had a very good profit margin, 20,000 somoni net profit ($2,000). I started harvesting from early April and sold 2.5 tons by June. It is much more profitable than sowing cotton per hectare,” says Hasan.

Hasan’s greenhouse was installed next to a traditional year-round greenhouse so that other farmers can easily see the difference between the two. The benefits from the new greenhouse have motivated 40 farmers from neighboring farms and districts to order mobile greenhouses of their own, creating a sustainable greenhouse management system.

The USAID Agribusiness Competitiveness activity in Tajikistan runs from 2018 to 2023. It works to expand and improve market systems in order to increase employment opportunities and income for agribusinesses.