How Women Are Driving Change in Kathmandu

The project ended 12 years ago. The entrepreneurs it created are still going strong.

Maya Ghalan is piloting her electric vehicle along the bumpy roads of Kathmandu, Nepal. In the last 15 years, she has logged thousands of miles in the scrappy three-wheeled electric minibus the Nepalis call a safa tempo. It’s part of an improbable fleet of more than 700 electric vehicles that have been plying the streets of Kathmandu for over 20 years.

Ghalan, one of the first female safa tempo drivers in Nepal, is where she is today because of a Winrock project that helped women own and drive these vehicles. Though this USAID-funded project ended in 2006, the 200-plus women entrepreneurs it created are completely self-sustaining—forging their own livelihoods, improving the environment and providing low-cost transportation for the Nepalese people. 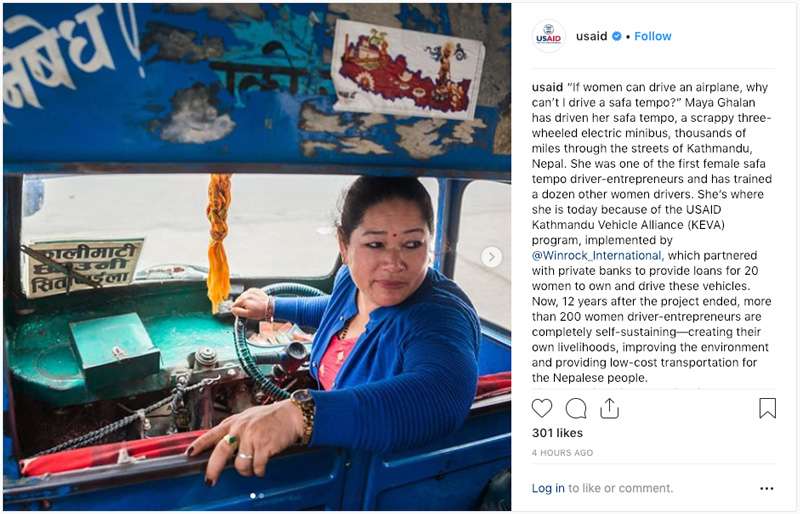 “If Women Can Drive an Airplane, Why Can’t I Drive a Safa Tempo?”

Ghalan, 41, began driving a safa tempo in 2003, after her husband, also a driver, taught her the basics. He was in poor health, so Ghalan pitched in to earn income for her family, which included the couple’s three children and three of Ghalan’s younger siblings. 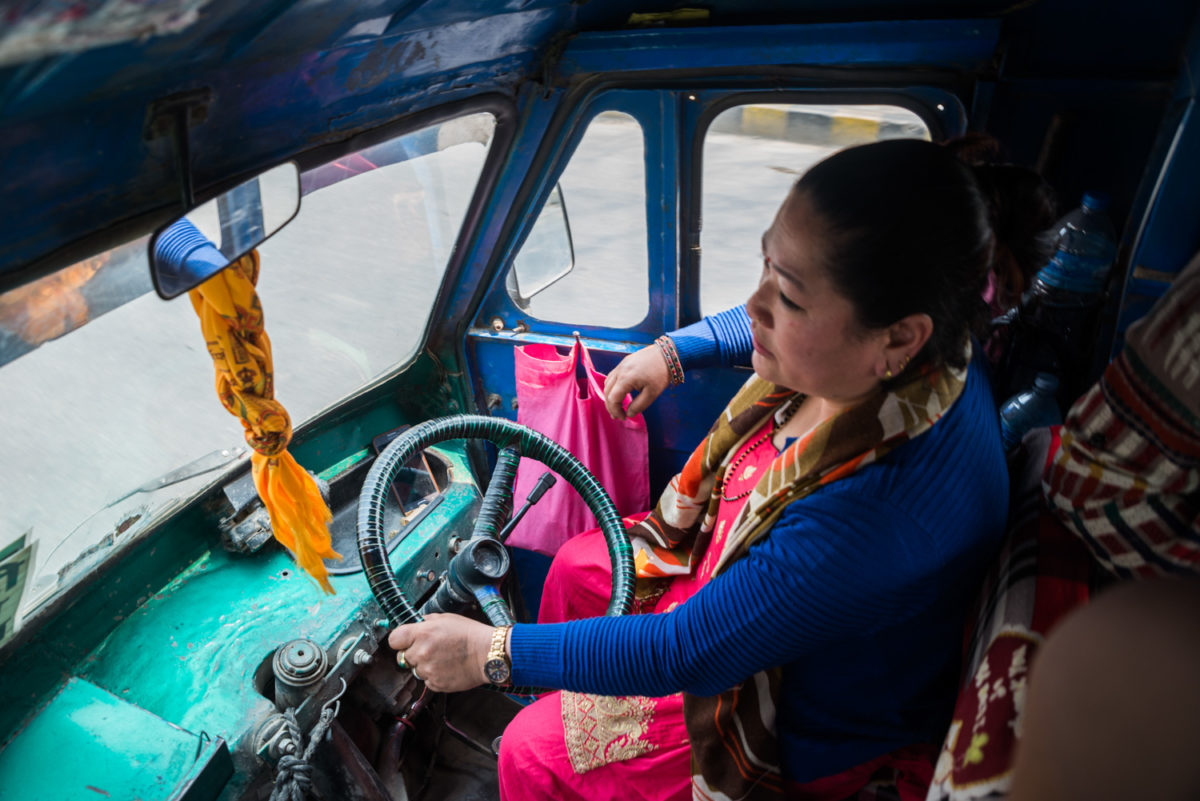 Maya Ghalan driving her three-wheeled electric minibus. The economics of the safa tempo depend on the driver. When the driver owns the vehicle, she makes the battery last. Photo by Pramin Manandhar.

Women were uncommon behind the wheel then, and Ghalan was harassed. “I used to cry a lot. But I also used to think that if women can drive an airplane, why can’t I drive a safa tempo?” Ghalan says. “I was very determined because there were no other choices. Because I had to look after my children. I had to earn income.”

And she did earn income. But it was less than 4,500 rupees (USD $40) a month, not enough for a family of eight. She thought that if only she could own her own vehicle, things would be different.

Turns out, people studying Nepal’s energy sector had a similar idea. When Bikash Pandey, director of Winrock’s Clean Energy group, opened Winrock’s Renewable Energy Support Office (REPSO) in Kathmandu in 1998, safa tempo use was surging because the government had recently banned the highly polluting three-wheeled Vikram tempo. As a native of Nepal, Pandey knew that electric vehicles were perfect for its capital city. Kathmandu is relatively small and has low speed limits, so the 70-mile-a-day battery range fit perfectly. 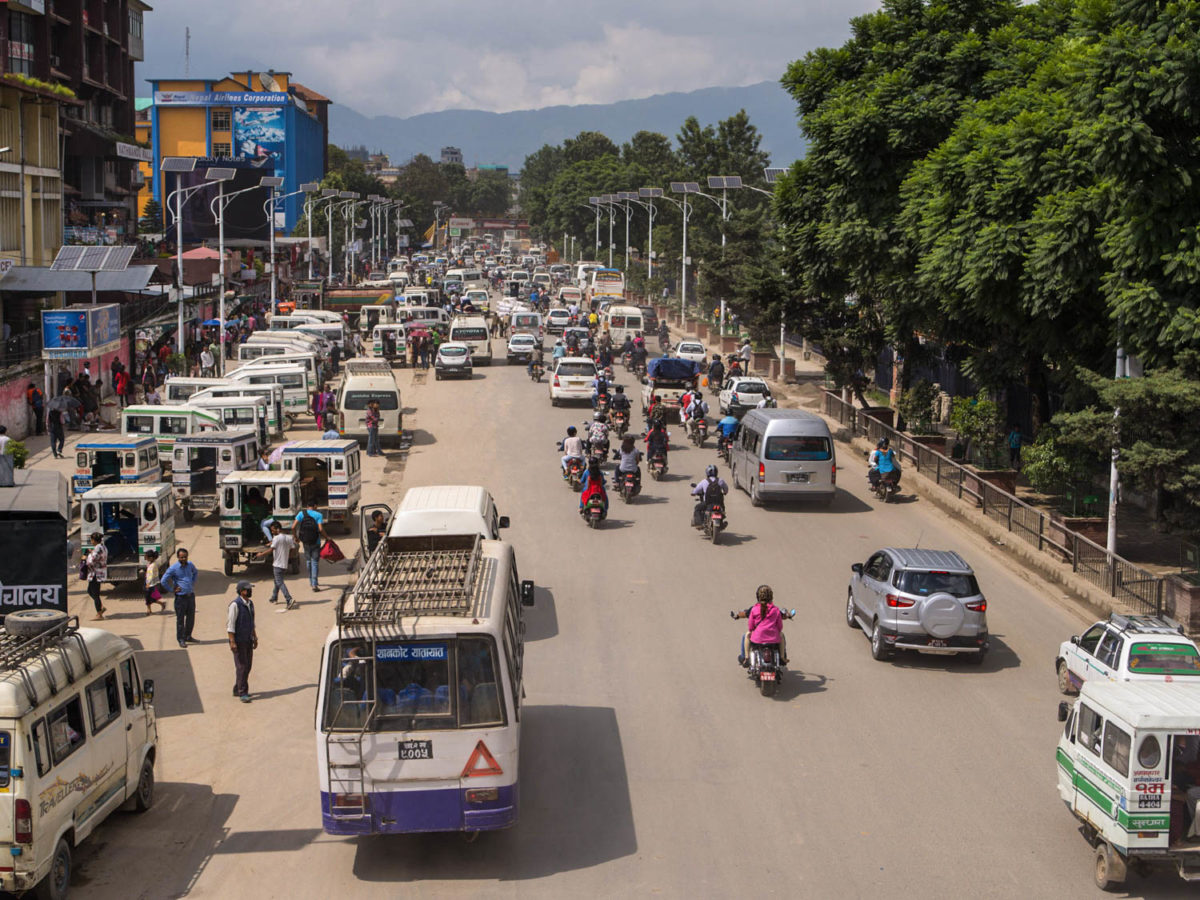 Safa tempos are a familiar sight on the streets of Kathmandu, and have been for the last 20 years.

But the economics of electric vehicles depend on the driver, Pandey says, “and there was a disconnect, because many vehicles were owned by somebody and driven by somebody else.” Batteries are expensive, and they don’t last long when vehicles are driven too fast or too long. Frequent battery replacements were making an affordable technology not so affordable—and hampering the market expansion created by the Kathmandu Vehicle Alliance (KEVA), the USAID-funded program that Winrock participated in from 2001-2006. When the driver owns the vehicle, though, there’s every incentive to make the battery last.

“I’m Not Just a Driver, I’m an Entrepreneur”

Here’s where Nepali women enter the picture. Because they shoulder more family duties, women safa tempo drivers typically drive fewer hours than male drivers. Slower speeds and fewer hours are a recipe for longer battery life, up to a year longer, in some cases. “You actually get significantly more total hours from the same set of batteries by driving shorter distances each day,” Pandey says. “Fundamentally, women drivers are good for electric vehicles.” 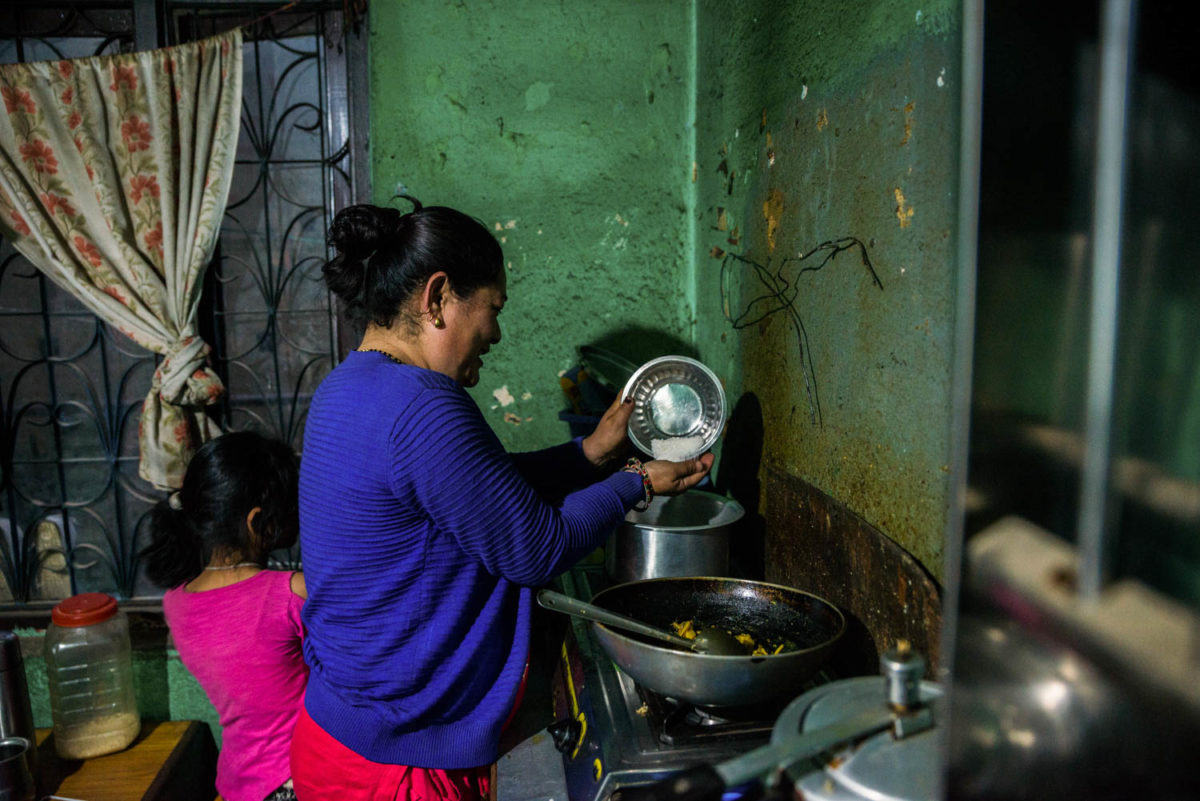 Maya Ghalan makes dinner at home with her niece. Owning and driving a safa tempo has helped Ghalan lift her immediate and extended family out of poverty. Photo by Pramin Manandhar.

But how to get women behind the wheels of vehicles they could also own? Potential borrowers with limited means might never secure financing on their own. And the low safa tempo price tag (between $4,000 and $4,500) was too small for most banks to touch. Pool small loans together and guarantee them, though, and that’s another story. So Winrock and the KEVA project recruited 20 women, and Winrock used an internal grants program, money set aside to fund innovative solutions to challenging problems, to guarantee a loan with the Bank of Kathmandu.

The women were not typical borrowers—they could barely scrape together small down payments—but each woman paid her loan back in full and on time. The program was so successful that it was quickly replicated, and it paved the way for easier woman-owner financing in the years to come. 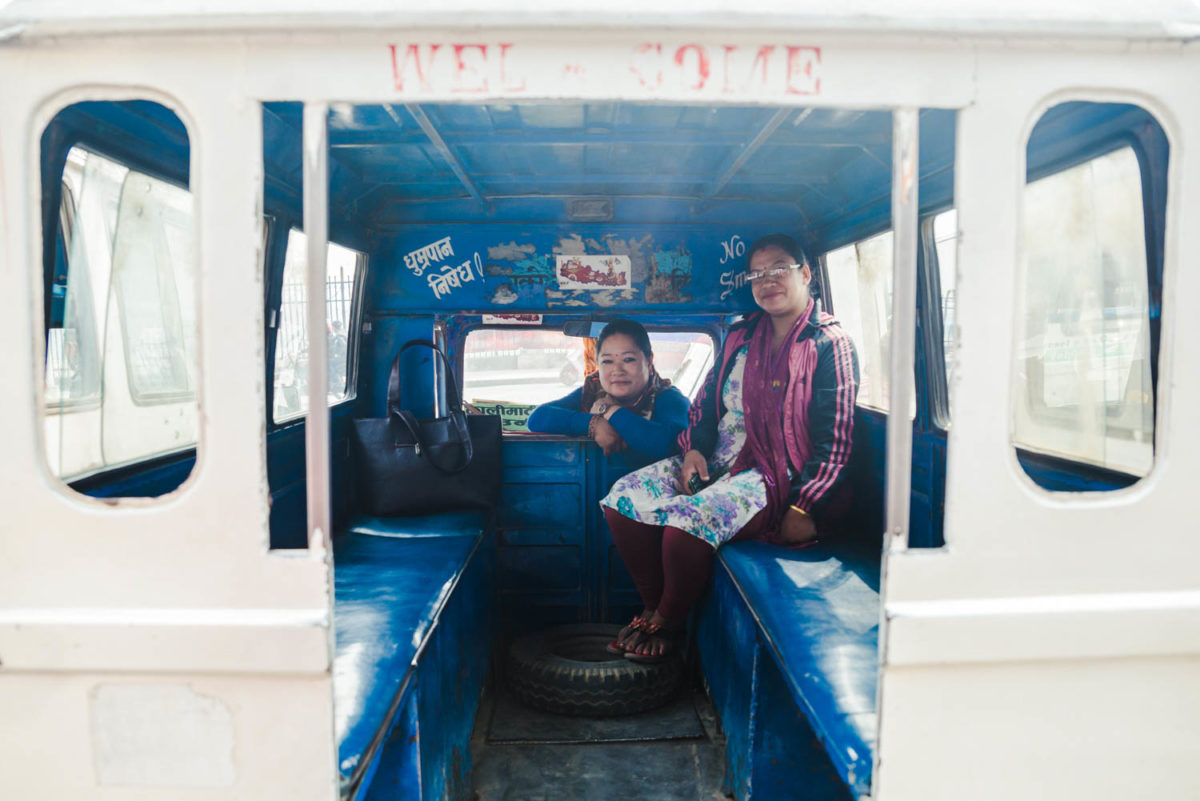 Maya Ghalan with her friend Parbati, who also owns and drives her own safa tempo. Photo by Pramin Manandhar.

“I am separated with two children,” says Ghalan’s friend and fellow driver Parbati. “No one would allow me to drive their vehicle, so I took financing to buy my own safa tempo. My youngest daughter has ridden with me since she was three months old; now she is six. I have to feed myself and my children, and this is a good income.”

“My life changed dramatically after I became a safa tempo driver,” Devi Shrestha told Scientific American in a 2013 article. Her income quadrupled, she sent her children to a better school, and she eventually bought a second vehicle. “So now I’m not just a driver, but also an entrepreneur.”

The woman owner-driver concept is a model that works, says Dinesh Dulal, head of microfinance, renewable energy and agriculture for NMB Bank Limited in Nepal. NMB, which merged with the Clean Energy Development Bank (which Winrock helped found) three years ago, began lending to women safa tempo drivers after the original cohort proved to be such excellent borrowers, paying back their loans on time and with no need for bank follow-up. “We promoted the driver-owner scheme. We helped the driver to own,” Dulal says. 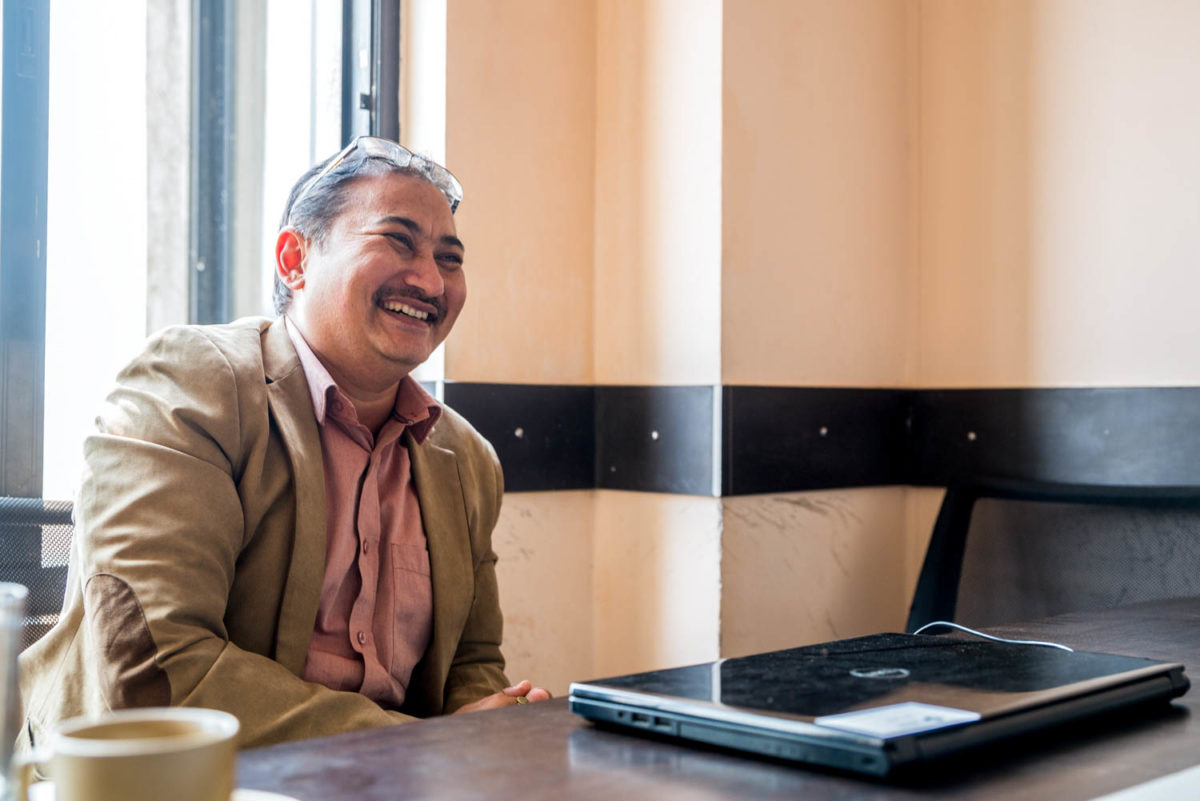 Umesh Shrestha worked with the KEVA project and was part of a successful lobbying effort that will keep safa tempos on the streets of Kathmandu. Photo by Pramin Manandhar.

The journey of the safa tempo is “one of the most successful stories in the world, that an electric vehicle fleet of 700 has been serving more than 20 years,” says Umesh Shrestha, a Nepali businessman who imports batteries, owns charging stations and converts gasoline-powered vehicles to electric ones. The current and former president of Nepal’s Electric Vehicle Association, Shrestha worked closely with Winrock and the KEVA project.

“In many countries they are using coal to generate electricity. But in our case, it is 100-percent clean energy,” says Shrestha, who refers to hydropower as “white gold.” Nepal lacks the 24-hour-a-day industrial base to make immediate use of hydroelectric power generated at night, so batteries serve an important function by storing electricity for later use.

Shrestha recently helped extend the safa tempo’s future when he was part of a successful lobbying effort to exempt it from a new government policy that bans vehicles more than 20 years old. “Now the government has changed their statement so that electric vehicles, including three-wheeled safa tempos, can run up to 30 years,” he says. Shrestha is also introducing quick charging stations and lithium phosphorus batteries to replace the lead acid type, technologies that will make electric vehicles even more efficient in Nepal.

“Thanks to Maya, I’m Living a Good Life”

There are now more than 200 women safa tempo drivers in Kathmandu—and Ghalan seems to know many of them. In fact, she has trained a dozen, including her sisters and eight other women. 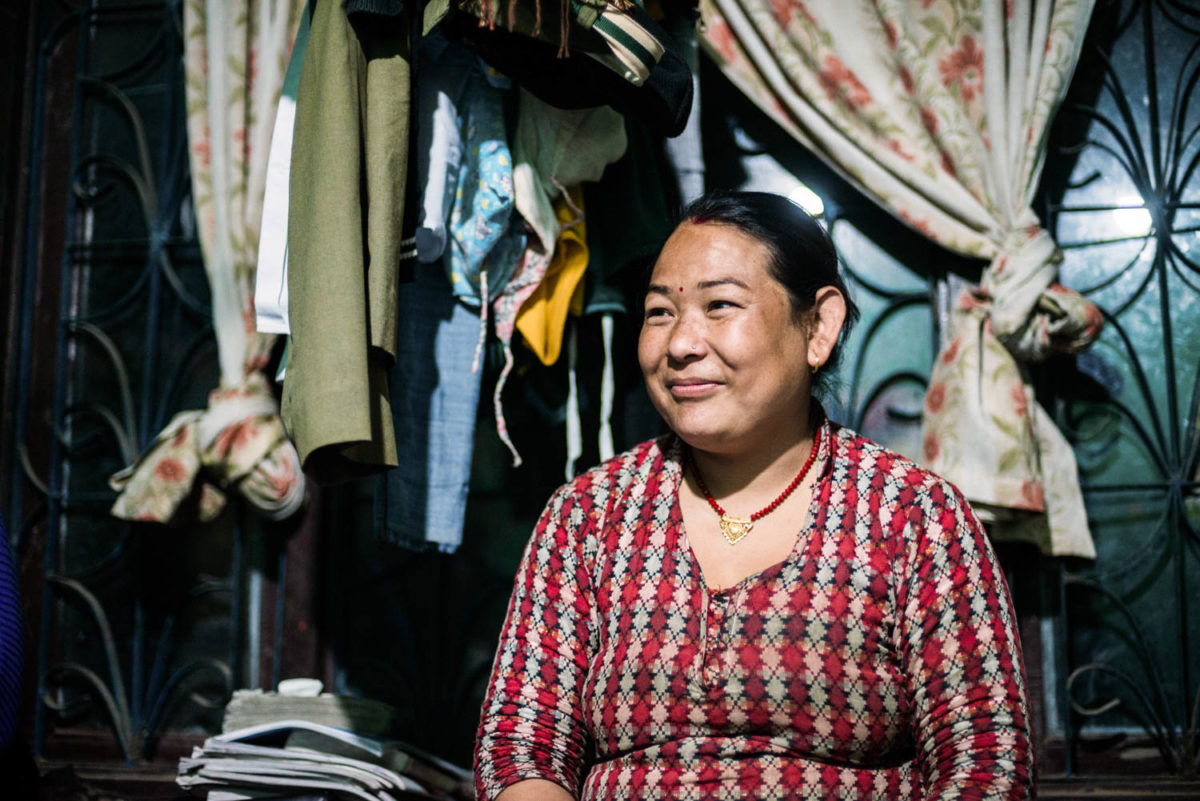 “Had I stayed in the pashmina field, I might be living a miserable life. Thanks to Maya, I’m living a good life,” says Maya’s sister, Nisha. Photo by Pramin Manandhar.

“Before Maya taught me to drive, I worked making pashminas,” says her sister Nisha. “It was tough to feed my family. Had I stayed in the pashmina field, I might be living a miserable life. Thanks to Maya, I’m living a good life.”

Ghalan is proud of the women she’s trained. “One of them was captured by the Maoists during the Maoist Insurgency in Nepal [an armed conflict that lasted from 1996-2006]. She managed to escape and come to work, but she had nothing left to eat. So, I trained her and she’s earning a fair amount of money now,” Ghalan says.

Ghalan has since bought another safa tempo and begun to raise her family out of poverty. Her daughter is in college and her two sons in secondary school. She was even able to afford expensive medical care for her younger brother. “Thanks to Winrock I could pay for his heart surgery,” Ghalan says. Without this, she says, “I would be crying all the day.” 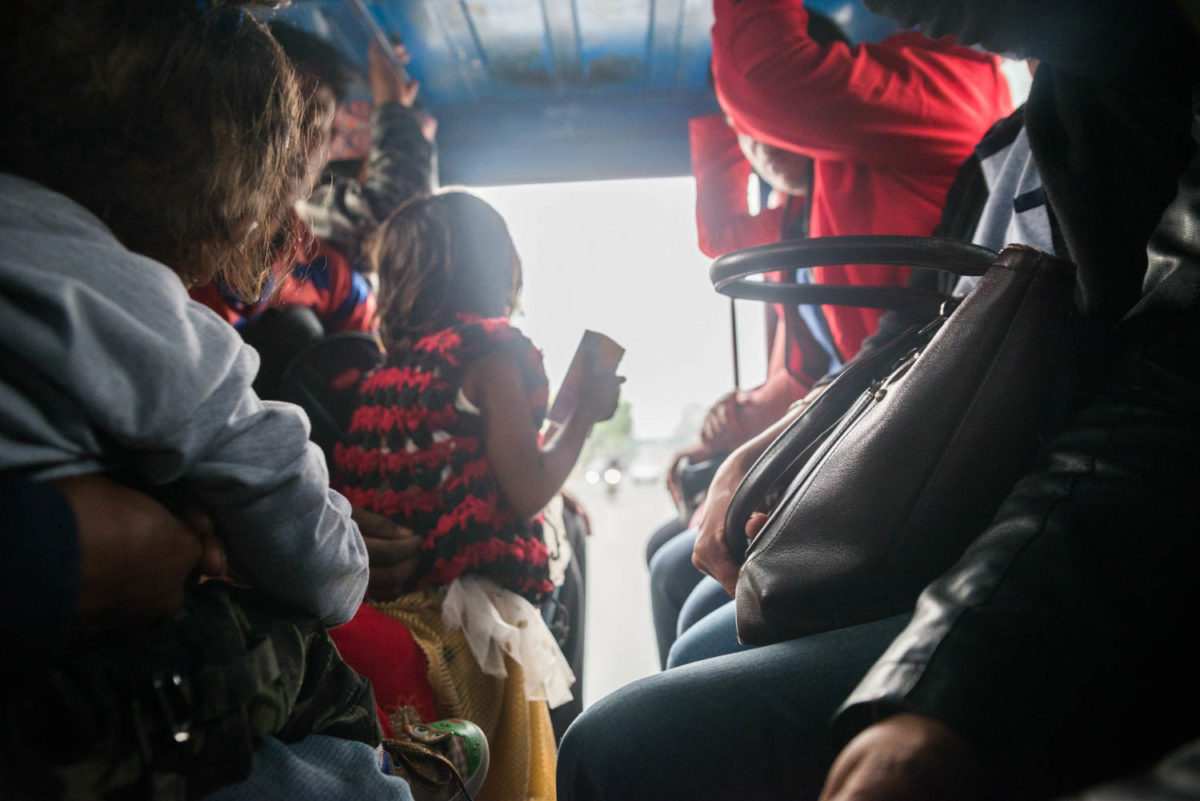 Safa tempos are made to hold 12 passengers, but often more people squeeze in. Photo by Pramin Manandhar.

Instead, Ghalan shows up every day at the charging station to pick up her safa tempo, number 3907, and begin the first of many roundtrip journeys along her route. The safa tempo is one of Kathmandu’s least expensive rides, so the vehicles are usually packed with students, day laborers and mothers holding babies. It’s a bouncy, chaotic ride, with people jumping on at stops along the route and pounding on the metal roof when they want to get off. But Ghalan keeps her cool through it all, waving hello to fellow drivers, making her way through the narrowest lanes in Kathmandu. She looks after her customers: “Whenever I find any of the public transport throwing smoke, I scold them. I say, ‘Because of you buses, the passengers inside my safa tempo are getting agitated.’ I open my door and shout, ‘Look at you, buses. You’re making so much pollution.’”

No one could have predicted the catalyzing effect of Kathmandu’s first female safa tempo drivers—how skills and confidence have been passed from woman to woman. Nepal’s women safa tempo drivers have boosted the country’s sustainable energy sector and shaped the streets of its capital city. They have built good lives for themselves and their families. They are proof of the lasting good that can come from small changes. Their legacy continues.

By Anne Cassidy, with additional reporting by Chadani Pandey.