MUSing on Water in Northern Ghana

On rain, sun, hippos — and new answers to old challenges. 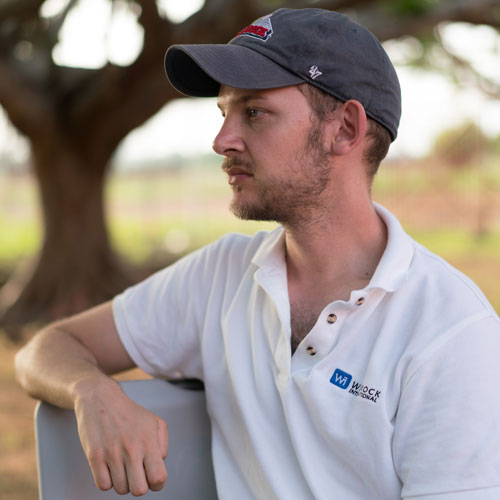 As an intense sun beat down on northern Ghana, a barefoot child scooped drinking water from a drying puddle, a field of corn struggled to grow at the edge of a eroding riverbank, and women journeyed across town with buckets of water on their heads.

Northern Ghana receives 90 percent of its yearly rainfall during the wet season, when there is often too much water. Then the dry season begins, and suddenly there isn’t enough. Since northern Ghanaians depend on water not just for drinking and washing, but also for their livelihoods — agriculture, livestock and processing native shea nut into butter — having enough water to perform these activities year round requires careful management of this erratic resource.

And it was to help in that endeavor that I was huddling with colleagues in the town of Wa, learning the basics of multiple-use water services (MUS). As part of the Winrock-managed USAID Ghana Agriculture and Natural Resource Management (AgNRM) project, we were beginning a two-week training program focused on the assessment of community water supply and demand. This was part of the MUS approach, which encourages community leaders and local governments to make informed decisions about water security. Over two weeks in April, AgNRM brought Winrock’s MUS expert Megann Mielke to Ghana to train project staff. As a member of Winrock’s Ecosystem Services Unit, I was tasked with injecting AgNRM’s natural resource management themes into the MUS, which offered me an exciting opportunity to understand the complexities of community water management. 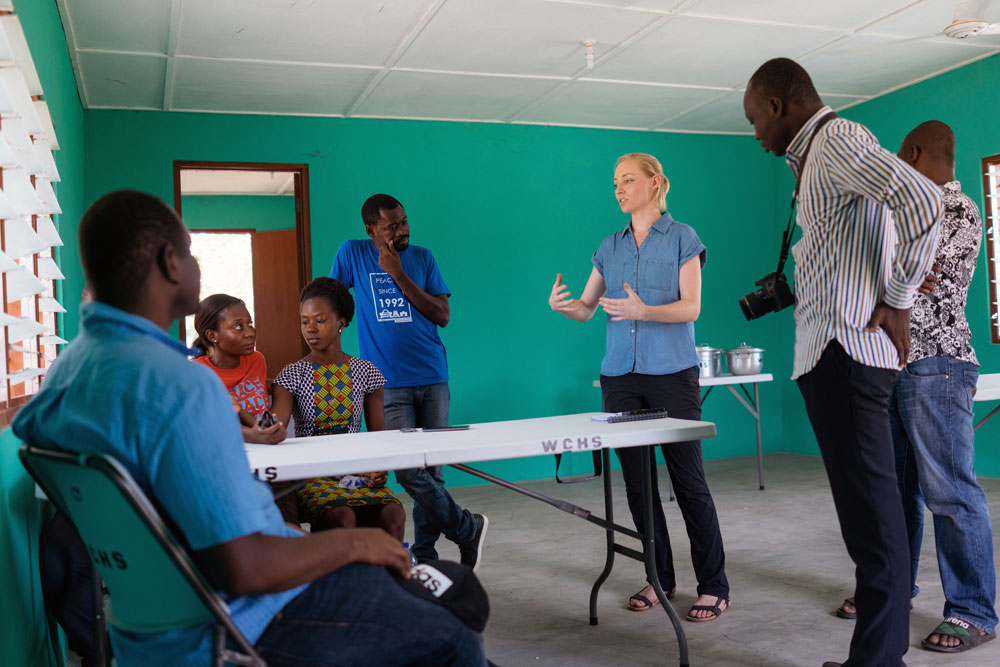 As a spatial analyst, I always think in terms of time and space. I thought community water management was all about distances: if you could ensure there were viable water sources spread evenly around the community and in higher concentrations in more populated areas, everyone would have water. Not so, said Mielke as we sat around the table in Wa. Ownership and governance structures often matter more than proximity. The well around the corner doesn’t matter if its owner won’t let you use it.

This is an issue the Center for Conflict Transformation and Peace Studies (CECOTAPS), an AgNRM partner, understands well. CECOTAPS is a local Ghanaian organization specializing in peacekeeping and conflict resolution. “Sometimes there are powerful people who don’t live in the community but they have control over the water body,” explains Richard Forgor, a CECOTAPS representative participating in the training. “This generates conflict between the settlers and the owners.” What Forgor describes is one of the trickiest parts of land use planning in Ghana: the land tenure system. Land and water rights are owned mostly by chieftains, while the people who live on the land, the “settlers,” simply lease it to plant and harvest crops. When the settlers want to improve their water access, they must first seek the chief’s permission.

This is where MUS’s information-gathering approach can help. Sustainable water systems must be designed to include all water uses rather than focusing on just one. If the chief constructs a new dam to provide water for his livestock but the settlers don’t have enough water to wash and bathe, both humans and livestock will use the same reservoir, leading to water-quality issues and overuse of a water source that will diminish more quickly in the dry season.

As we pondered the implications of our newly-acquired MUS knowledge that evening back at the hotel, the weather was shifting: a steady wind picked up and flickers of light in the distance became streaks of lightning; thunder claps and heavy rain began to pound the roofs. The wet season had arrived. 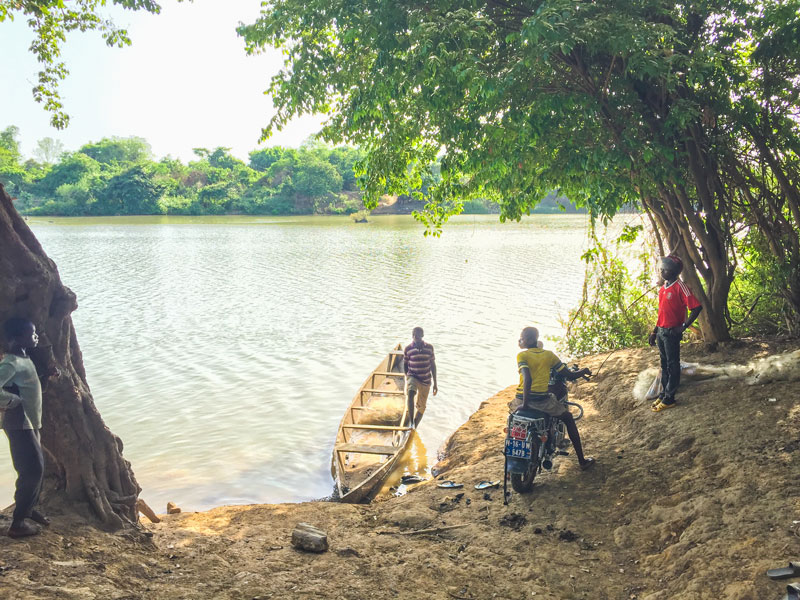 The Black Volta River forms a boundary between Ghana and Burkina Faso. The Winrock team, which was based in the nearby village of Talawona, determined that the area is not water-scarce. (Photo by Gabriel Sidman.)

The next week we headed west, away from the city to the banks of the Black Volta, a large muddy river that forms the border with Burkina Faso. We were housed in the village of Talawona, made up of about 30 households of maize farmers and fishermen. Talawona is also adjacent to some natural sand islands in the river, making it a perfect habitat for possibly the last population of hippopotamuses in Ghana. We spent two days touring water sources, visiting households and helping create community maps. We saw women hoisting massive metal basins of water on their heads, a skinny canoe ferrying bicycles across the Black Volta, and a boy dumping the day’s catch of small silver fish outside his house. As we learned more, the importance of clean, available water to this community became ever clearer — and MUS gave us a powerful lens for viewing potential interventions. 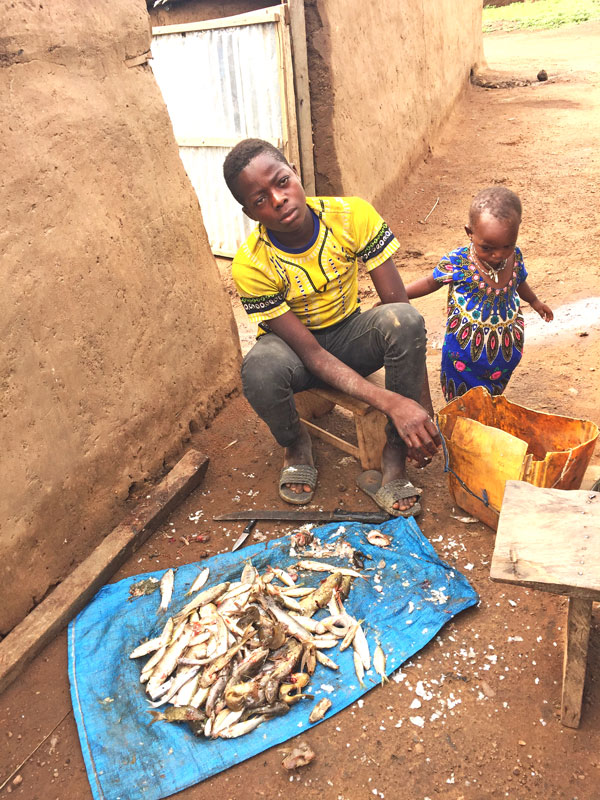 A young boy cleans fish outside his home in Talawona, Ghana. (Photo by Gabriel Sidman.)

As we debriefed each night over local Ghanaian banku balls and groundnut soup, we came to several conclusions about Talawona’s water use. First, the community did not seem desperately water-scarce. They had two boreholes that held water year-round, and if those failed, the river was a short walk away. Second, perceptions of water varied by gender. When men were asked to make their own community map, they pointed to a small pond as an important water source, while the women emphasized boreholes and didn’t mention the pond. This is probably because men are traditionally in charge of livestock, which use the pond for drinking, while women oversee the domestic water use supplied by boreholes.

Third, given the good water sources, we were surprised to learn there was no dry season planting in the village and therefore no vitamin-rich fruits and vegetables for much of the year. This could be addressed by AgNRM’s planned work to improve household nutrition, using keyhole gardens and improved rainwater harvesting, Mielke said.

It was becoming clear how to put MUS into play. Not only could the project carry out assessments in key locations to better understand where interventions were necessary, but communities could learn to do their own assessments for land use and water resource management. In addition, AgNRM’s planned ecosystem services evaluation could help communities understand the tradeoffs between, say, reforesting riparian areas and maintaining land the way it is, or, at the regional level, understanding the impact of climate-smart agriculture on larger watersheds such as the Black Volta.

Furthermore, AgNRM’s governance specialist Martin Yelibora saw a way to work within the land tenure realities of the region: “The communities can think collectively to manage their natural resources, but you need the chief to endorse [their plans]. Once the chief is within the forum, then the rules around these water bodies can be created with the chief’s agreement. So in case there are any conflicts that arise, we are able to go back to the chief and the chief helps to address these problems.” One of the project’s central goals is fostering community organization through empowering Community Resource Management Areas (CREMAs). AgNRM currently supports six CREMAs in northern Ghana, each of which includes 10-15 smaller communities such as Talawona. 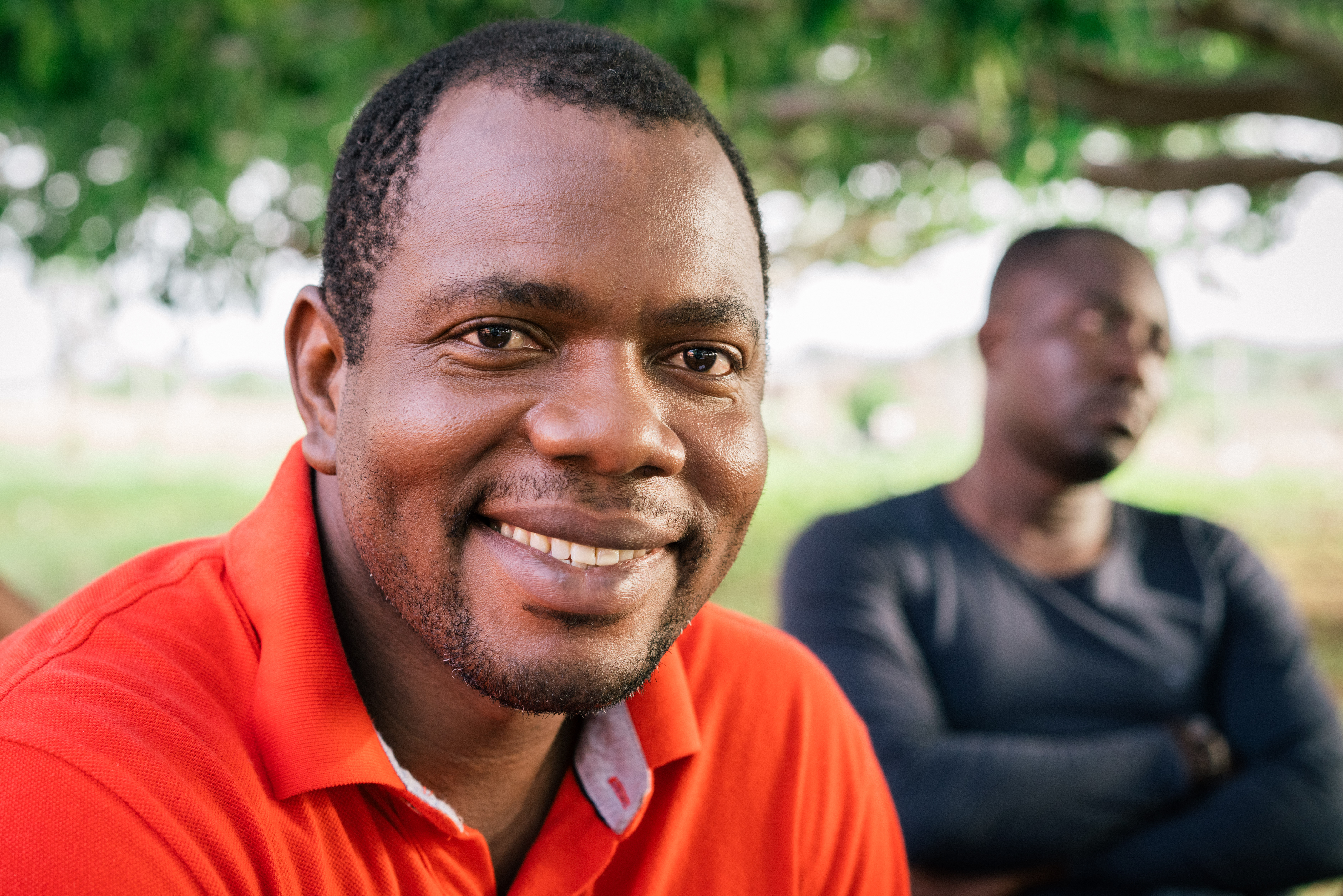 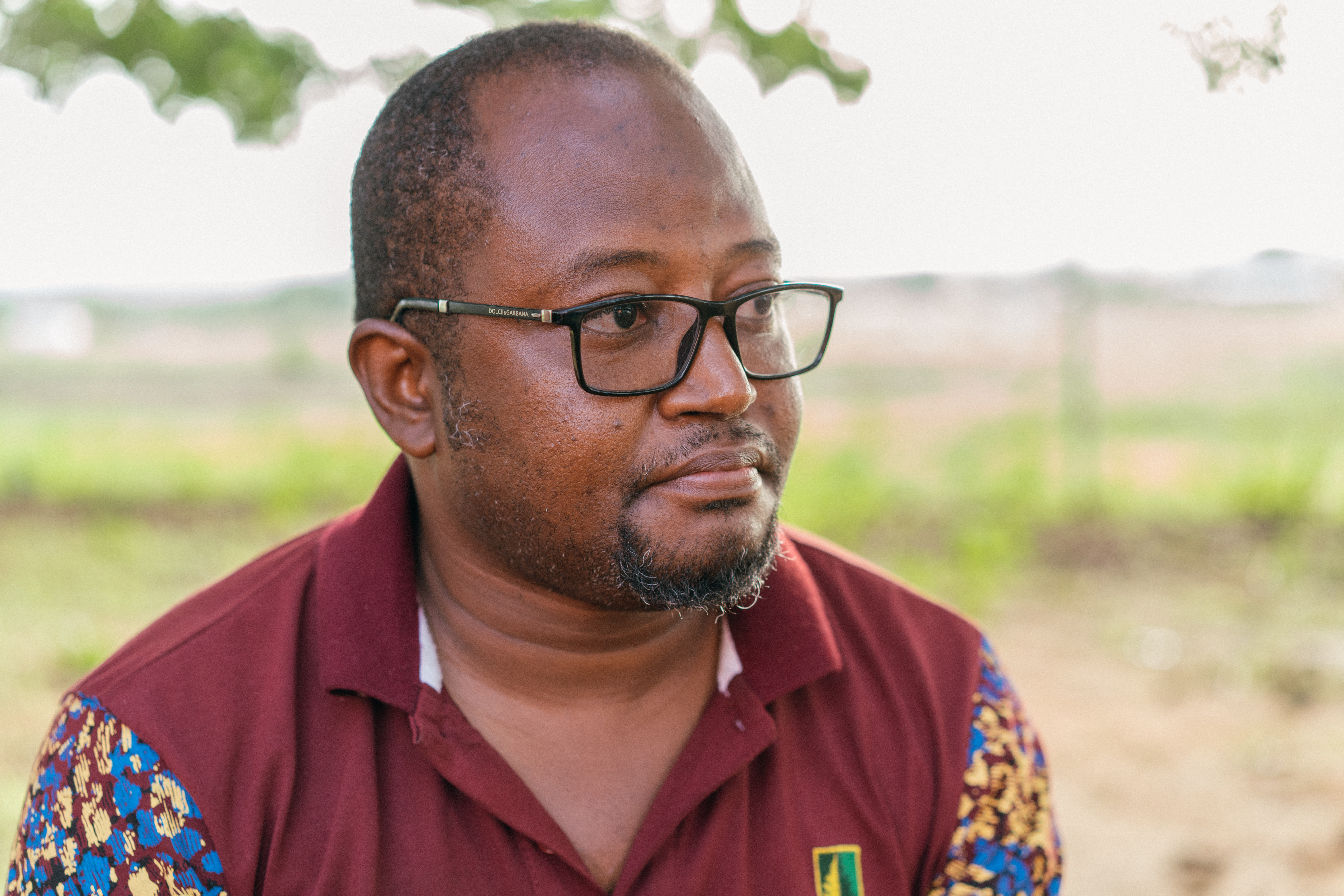 After the assessment exercises were complete, the team gathered to discuss the training under the shade of a broad tree, which offered some relief from the mid-afternoon heat. Clearly, the MUS tools would need to be modified for northern Ghana, but there was excitement about the possibilities. “The concept of MUS is new; most of the team does not have a background in water. However, we relate easily to it, and now we have a framework that we can apply when dealing with water resources,” said Bright Kumordzi, AgNRM’s natural resource management and MUS manager.

That evening our conversations were cut short by a brisk wind that whisked dust into our faces, a reminder of the harmattan sand storms common in northern Ghana. But this was no dry season storm. Once again, clouds gathered, drops fell and we raced back to our cabins. As thunder roared and rain pounded our metal roofs, I was reminded again of water’s omnipresence in the landscape around us. 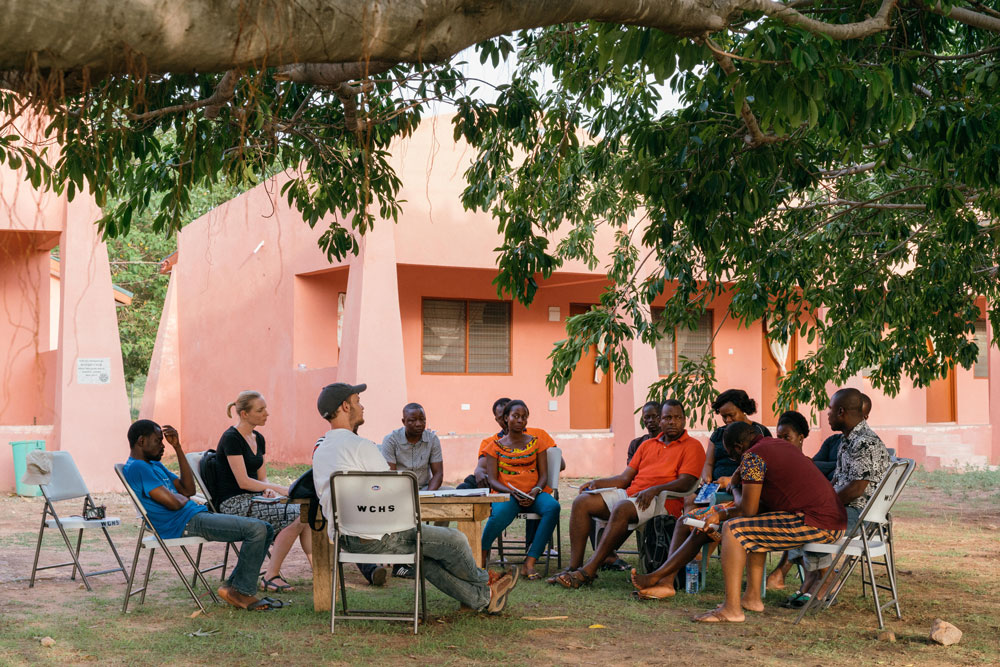 The MUS team debriefs under the shade of a large tree in Talawona. (Photo by Nana Kofi Acquah.)