Razia (name changed to protect her identity) crouched behind the bushes along a highway in Kazakhstan, hiding every time a car passed by. She was determined to escape, fearful that her “owner” was chasing her and that she might have to return to the meaningless existence she had been trapped in for months. “I was cold, devastated, tired, and scared. All I wanted was to be far away from that horrible, scary person,” recalled Razia.

Her terrifying ordeal began with a job advertisement that Razia stumbled upon while surfing the internet. “There were no jobs in the village [in Kazakhstan] where I lived, so I jumped at the chance to earn money in the nearest big city. I didn’t suspect a thing even when I first arrived,” said Razia.

On her first day, the owner took her identification documents for processing but never returned them. She was told that she had to work as a cook, cleaner and waitress at the hotel-restaurant-bar complex located in a remote area on the outskirts of the city. When it was time for her to be paid, the owner promised to pay later, but never did. Razia was dependent on him for food and accommodation. She felt trapped and was very afraid of him, certainly too afraid to confront him.

Even though she was not physically restrained, she was mentally coerced. The owner was always watching, making it hard to ask customers for help. When a couple of policemen came to the restaurant Razia decided to take a chance. “I slit my wrist in a feeling of hopelessness. I also hoped it would get their attention. I felt ashamed, but at that particular moment it seemed like the only way out,” Razia said. Responding to her screams, the policemen rushed into the kitchen where Razia told them that she was not getting paid and was unable to leave. But much to her surprise, they only told the owner to pay her and left. That night the owner beat her and when he threatened to sell Razia into an even worse situation, she decided to escape. A few nights later, while the owner was drunk and asleep, she got her ID from his room and escaped through an open window. “It was dark, cold and scary, but staying was not an option,” said Razia.

Razia walked through the night, arriving in the nearest city the following morning. She was so ashamed that she decided not to tell anyone what had happened. Razia found shelter with distant relatives in a nearby suburb before finding a job caring for an elderly woman in her home. When Razia told her story to the woman’s son, he gave her some leaflets from the non-governmental organization Rodnik. Since 2001, Rodnik has worked to support women, children, and youth, protecting them against exploitation and violence. USAID provided Rodnik financial assistance to open a shelter in 2006 and has since continued to support their efforts to combat trafficking-in-persons. Rodnik was awarded a grant from the Government of Kazakhstan to run its shelter, starting in 2016, becoming Kazakhstan’s first government-funded shelter for trafficking victims.

Razia called the number for the shelter. “When we first saw Razia, she was very frightened, shivering, and worried that we might report her, and that the abuser would find her. She asked us to protect her, so we offered her a place at our shelter,” recalls Nina Balabayeva, Head of Rodnik. 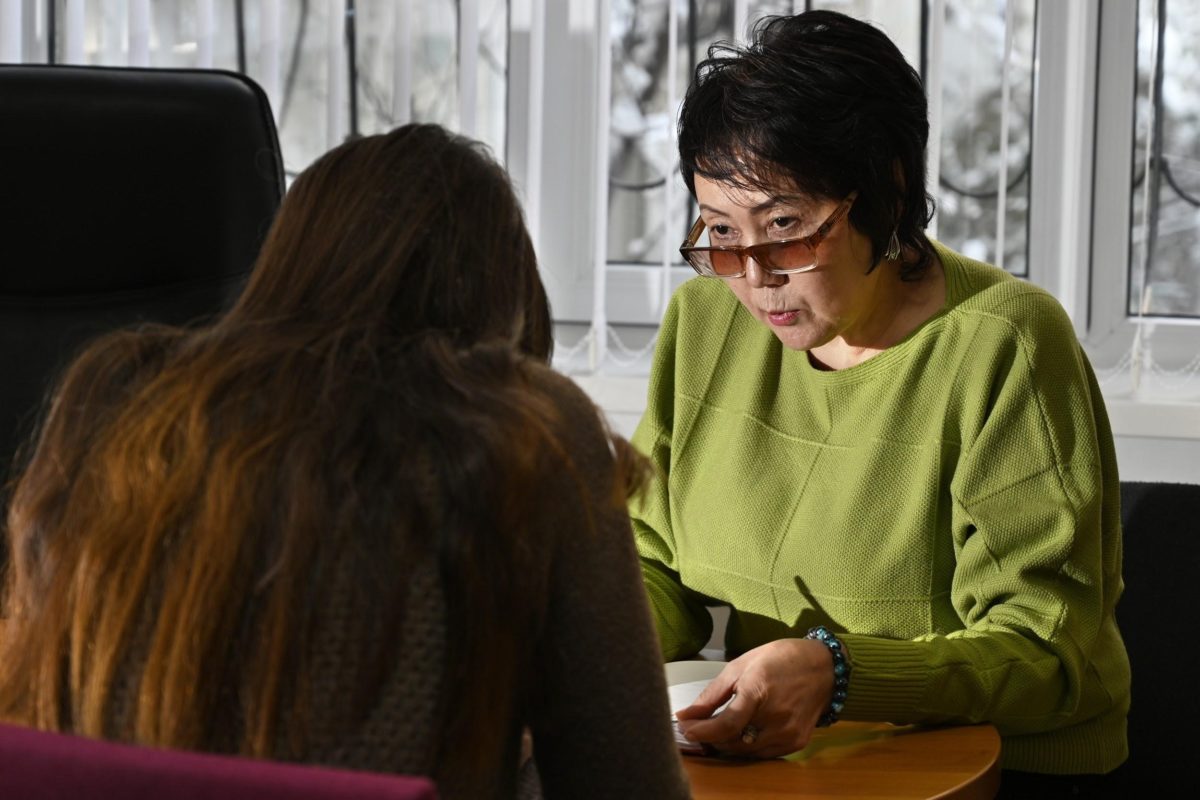 Rodnik reported her case to the local police but Razia didn’t want to pursue legal action against her former employer. One of the coordinators at Rodnik noted that this is typical, almost all victims of trafficking decline to file a case because they are scared or don’t want to endure a lengthy legal process.

Razia noted, “I was scared that my former employer would find me, so I deleted my profile from all social media, I changed my hairstyle and I wore a hat to look different. It took me a long time to start trusting people and pull my life together.”

Razia found success when her love of sewing was renewed. “When they let me use a sewing machine, I immediately started making covers for the chairs at the shelter. I like creating something new, it makes me feel good and it helps me not think about feelings of hopelessness,” Razia noted.

She is convinced that people, especially youth, should be aware of the methods that human traffickers use to lure victims into slavery so they can protect themselves and question job offers before accepting them. “I’ve realized, unfortunately from personal experience that almost anyone can fall prey to human trafficking. Young people from rural areas are especially vulnerable because they are not experienced and will accept any job offer that promises them money,” said Razia.

In September 2019, USAID initiated the Safe Migration in Central Asia project, implemented by Winrock International in five Central Asian countries. The goal of the five-year project is to combat trafficking in persons by empowering survivors, ensuring effective services, improving data and policies, and establishing systems that protect at-risk groups, working in close cooperation with local governments, civil society, and the private sector.

The U.S. government has worked with Kazakhstan to counter trafficking in persons since 2001 when USAID initiated its partnership with the International Organization for Migration (IOM). Since 2004, the U.S. Department of State’s International Narcotics and Law Enforcement Affairs section has invested $3.5 million to build the capacity of law enforcement in the country to identify victims, investigate trafficking cases, prosecute traffickers, and improve anti-trafficking legislation.

The COVID-19 pandemic has only exacerbated the dangers to at-risk groups as migrants have become stranded along borders or in foreign countries without work and resources. Many people have not been able to travel for seasonal work or to travel to locations with more opportunities. This puts people, like Razia, at high risk for exploitation. Traffickers take advantage of the lack of knowledge and desperate situation many have found themselves in due to the pandemic. Responding to the COVID-19 pandemic and related travel restrictions, the USAID-funded Safe Migration in Central Asia project is working to provide migrants with information to protect themselves and avoid potential exploitation.

Returning to a normal life and being able to interact with people has been a real challenge for Razia. “I managed because I had the courage to escape and eventually get help, but I wonder how many still remain in forced labor?” Razia said. The Safe Migration in Central Asia project is working to prevent this type of exploitation and to provide assistance to those who are victimized.

Most victims of forced labor don’t know what to do, when they end up in such a situation. If you need help or suspect someone is potentially a victim of forced labor or human trafficking, call the numbers below:

Victims of trafficking in persons may call a hotline or send a message at +996 559 189900 through WhatsApp to report the case – the operators will turn the call to IOM and respective government agencies for further proceedings.

+996 551 512640; +996 552 512640; +996 702 996615 – Sezim Crisis Center is a leading NGO that provides sheltering, psychological, and legal assistance to vulnerable women, including victims of TIP and victims of domestic violence. If unable to speak on the phone, a victim may seek the assistance through their Facebook page https://www.facebook.com/CrisisCenterSezim/(link is external)

1007 – Hotline of prosecutor general to help victims of human trafficking

1164 – Hotline of the Ministry of Interior Affairs

This story was originally published by USAID Kazakhstan