The House That Bats Built

One of the best ways to fight human trafficking is to create financial security. Savings groups do that — and much more.

At first, just a few dark shapes streak through the sky, but as the sun sets over Cambodia’s Svay Rieng province, the pace quickly picks up. Soon, thousands of bats are swarming from their roosts as they begin their nightly hunt for insects. “I have 50,000 to 60,000 bats living here,” says The Koeung, pointing to a pair of tall open-air sheds made of wood, tin and palm leaves. “It takes an hour or more for them all to leave their house.” 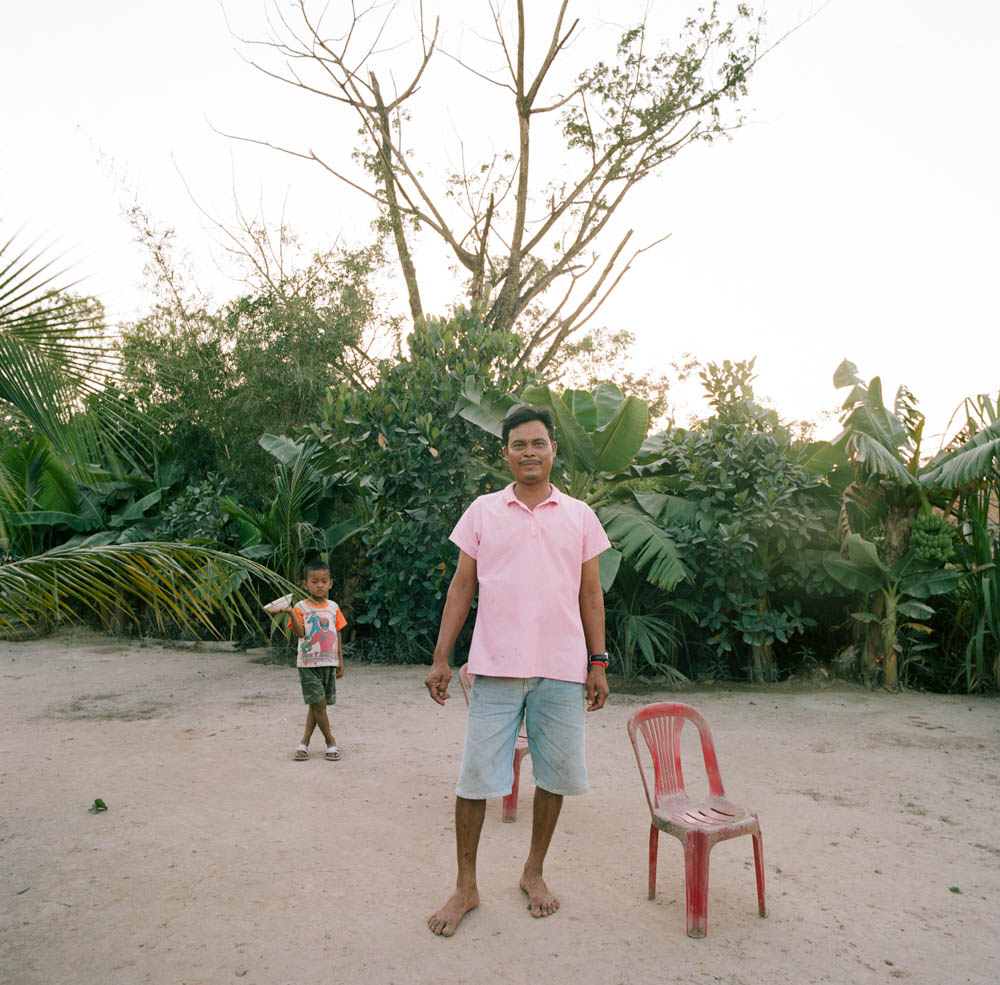 The Koeung and his wife, Prak Phea, have borrowed (and repaid) hundreds of dollars from the savings group to start a bat guano business. They now have a house, livestock — and 60,000 bats. Photo: Misty Keasler

Koeung is proud of his bats. They have helped his family prosper and allowed him to earn a living in Cambodia, rather than going across the border to Vietnam to work. To be more precise, it’s not the bats themselves that are responsible for this change, but the droppings they leave behind. Koeung harvests up to 12 kilos a day of bat guano, a fertilizer much prized in this region of small farms and poor soil. Koeung has regular customers who buy guano from him once or twice a week. 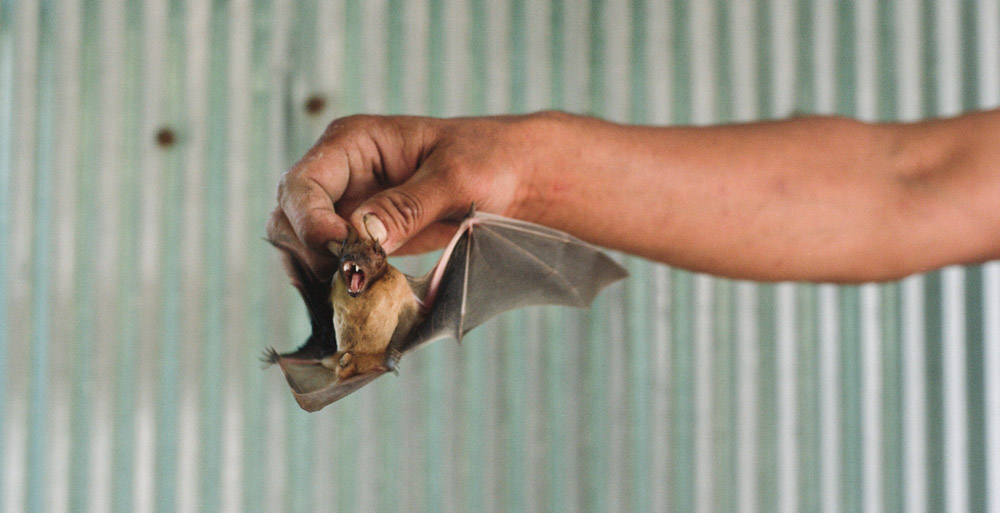 The Koeung shows off one of his bats, who was not happy at being awakened before nightfall. Photo: Misty Keasler

Koeung bought the bats with money he borrowed from a savings group in Taing Mao Village created five years ago by the USAID-funded Cambodia Countering Trafficking-in-Persons (CTIP) program. Svay Rieng province is surrounded by Vietnam on three sides, so many of the people who live here cross the border to work, beg or sell Vietnamese lottery tickets (which earns them a small commission). Some parents take their children out of school to beg, too, because having a child along usually ups the day’s take. 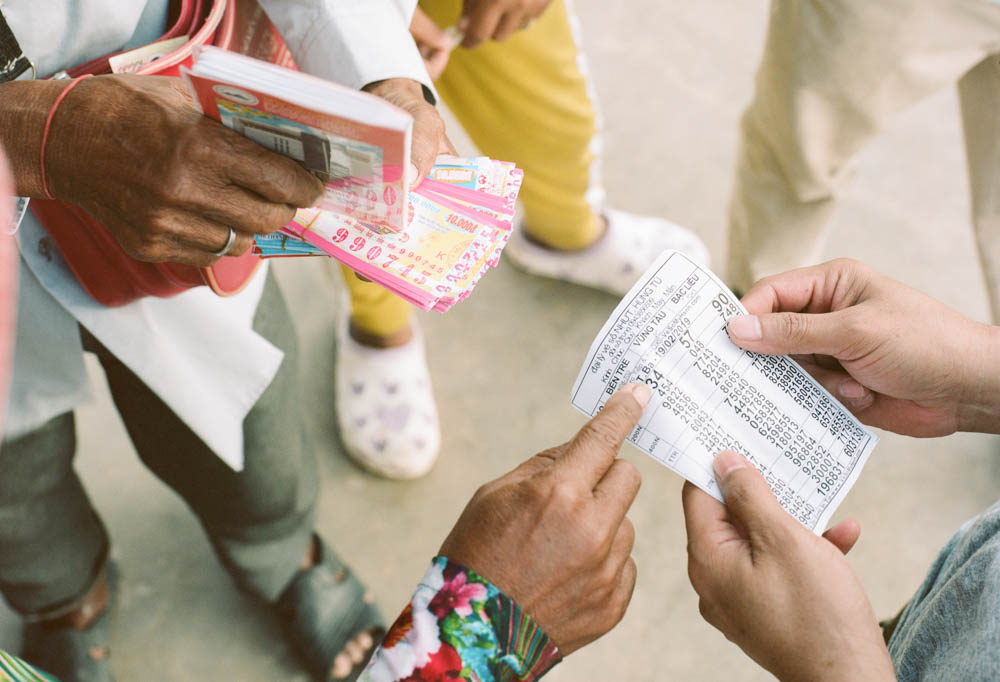 But the savings group has improved life in Taing Mao Village. Most people don’t beg anymore, and the few that do almost never take their children. Instead, community members help each other out. Here’s how it works: Every month, savings group members deposit a small amount into the savings group, and this provides a pool of funds that friends and neighbors can borrow to buy a pig, start a small business or send a child to school.

The savings group has been steadily growing since it was introduced in 2014 — from total assets of $1,500 to over $7,000 — and from 15 families to 48, about 20 percent of the village. Savings group members can borrow at a 2 percent interest rate — much lower than the almost 30 percent charged by some private money lenders. And the process is far less complicated than at microfinance institutions, where clients must deposit collateral and deal with more paper work. 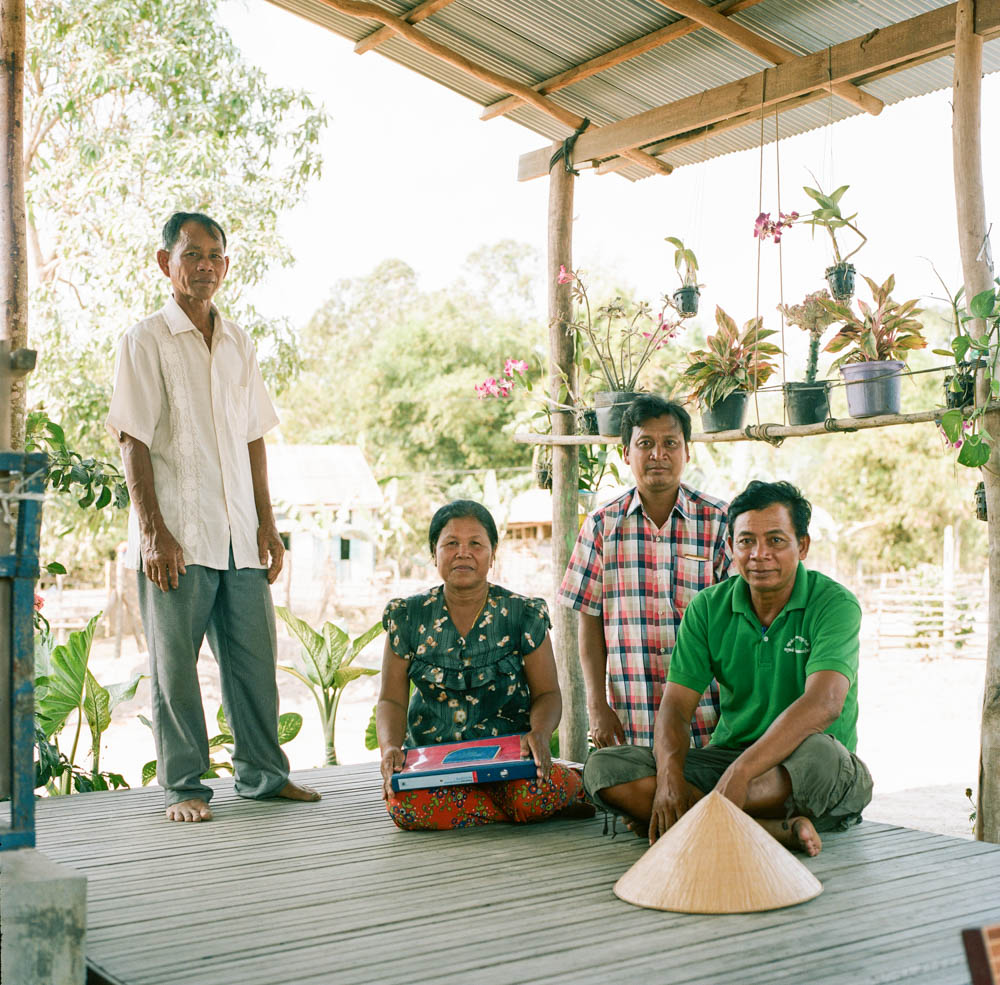 An additional incentive to savings group membership is the ability to borrow from the rice or cow bank. Members can eat or plant the rice and pay it back with additional rice for interest. If they borrow a cow, there’s a more complicated system of repayment, depending upon whether they keep or sell the calves. In addition to profit gained from earning interest on the money they deposit, savings group members also benefit from several activities CTIP holds, including trainings on agricultural techniques, animal raising, small businesses and financial literacy.

By the end of last year, there were 142 CTIP-launched saving groups in Cambodia with a total of 3,345 members. Assets and credit at micro-finance institutions in Cambodia are more than 10 times higher than they were in 2010, according to the World Bank, and the average loan size in Cambodia is now among the highest in the world. So being able to pool money and help each other makes a tremendous difference. 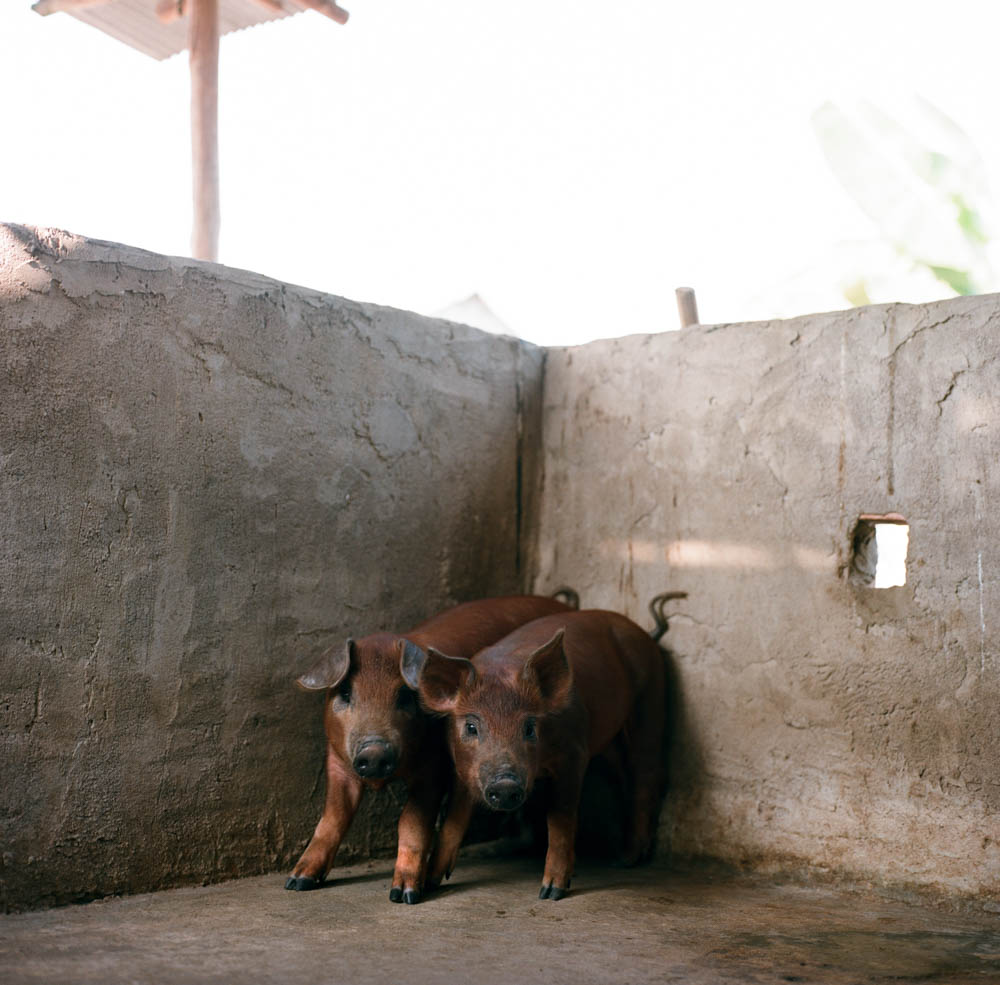 In addition to their booming bat guano business, The Koeung and Prak Phea are also raising pigs and chickens and selling them for meat. Photo: Misty Keasler

Koeung and his wife, Prak Phea, have borrowed (and repaid) hundreds of dollars from the savings group. In addition to their booming bat guano business, they’re also raising pigs and chickens and selling them for meat.

“Before the savings group, my life was very difficult,” Phea says. The family had no house, so they lived with her mother. Koeung often went to Vietnam to work. Now they have a house, livestock and income; their future looks much brighter. 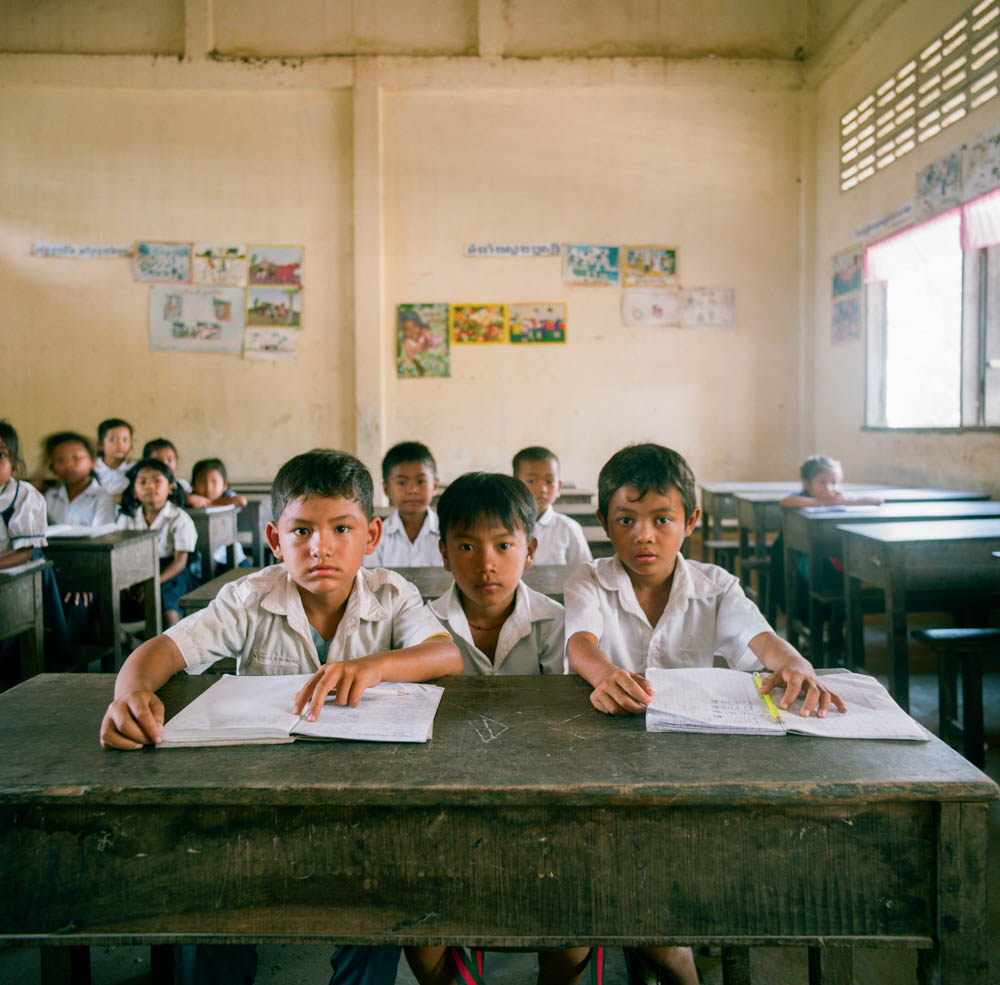 Che Chum, right, at the Chantrea Primary School. His mother, Prak Kea, used to take him to Vietnam to beg or sell lottery tickets — but she doesn’t anymore. Photo: Misty Keasler

Prak Kea and her husband, Yim Chean, also belong to the savings group. Kea used to take her children to Vietnam to beg or sell lottery tickets — but she doesn’t anymore. “I want my kids in school. I want an education for them,” says Kea, who only received a second-grade education herself.

The money her family has borrowed allowed Chean to purchase a moto remark (motorcycle bus), which he uses to ferry children to school. This brings more than $250 a month into the family coffers, enough to pay his own children’s fees. And the bus provides reliable transportation so other village children can get to and from school. 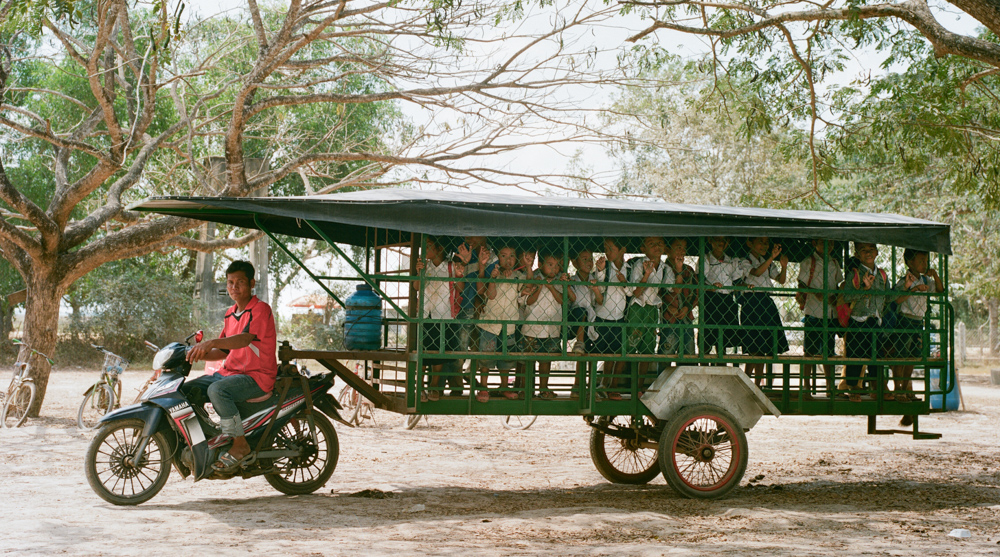 The principal of Chantrea Primary School, Chea Sopheap, says that enrollment has soared in the last five years. In 2014 there were 400 students in school; in 2019, there are 600 — “700 if you include kindergarten,” he says, proudly.

“Before, when people were desperate, they needed to go across the border to Vietnam to beg or sell lottery,” says Kheav Vin, chief of Taing Mao village. “We didn’t have anything here, so we would take children with us.”

Savings group chair Lek Choth agrees. “You couldn’t save much, and if you needed money urgently, the one source you could think of was a microfinance loan with high interest,” he adds. Now, he says, “Life is better than before.”