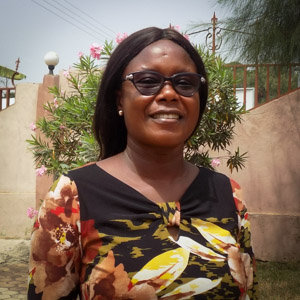 When I began my career with the Ministry of Food and Agriculture (MOFA) in the western region of Ghana, I became acquainted with the plight of women and how they are sidelined in extension service delivery and agriculture generally. Women farmers are often taken less seriously because they have few resources to implement extension recommendations. Even with the creation of a Women in Agricultural Development Division to deal with these gaps, we still must rely on male extension agents to reach female farmers because there are so few women in Ghana’s agricultural sector.

This means that with a predominantly male agricultural extension service, training and technical assistance often targets men (on days and times when women cannot attend) and female farmers are deprived of essential information, which affects their productivity.  In the cocoa sector, for example, women’s lack of access to extension support hampers their contribution to the productivity, quality and sustainability of the cocoa supply chain. This is in addition to their limited access to land and financial support, which also makes it harder to take advantage of larger markets and trade opportunities.

Within MOFA’s cadre of extension agents, there is a serious gender imbalance — only 23 percent are female, according to a 2017 study.  And there are few women going through agricultural programs at Ghanaian universities. In 2018, no women graduated from the agricultural extension program at the University of Cape Coast.

To overcome both these challenges, I’m leading the Havener Ghana Female Extension Pilot, which builds the capacity of women to provide critical agricultural extension services to female farmers in the Western and Ashanti regions. The pilot works in partnership with the Department of Agricultural Economics and Extension at Kwadaso Agricultural College. The eight-month internships provide selected graduates with practical experience, building their capacity to become community-based extension agents.

Over the past eight months, the four recent female graduate students have been running supervised training projects with adult female farmers. The interns are training the farmers in new agricultural techniques and in small enterprises such as snail harvesting and soap making. By improving their agricultural production and boosting their household incomes, families become more self-reliant and less dependent on child labor.

Through the interns’ initiatives, many female cocoa farmers have been officially recognized and registered as cooperatives by Ghana’s Cocoa Board. As a result, the women involved have the same access to input as men do and have already been supplied with fertilizer, improved cocoa pods for their nurseries, and chemicals to control diseases and pests. In the Sefwi Wiawso District in the western region, the interns are working with MOFA to support women farmers in vegetable production as an alternative livelihood activity.

The internships provide crucial experience to recent graduates, which is increasing the pool of qualified and experienced female candidates to serve within government extension agencies. Linda Osei, an intern in the Atwima Mponua District, said that through her work with the Havener project, she has learned more about adult learners and working with women groups. “Normally, when women are in the midst of men they feel shy to voice out their problems,” Osei says. “With the Havener approach, we have grouped the women separately so it is easy for them to talk and share their problems. In fact, if not for the project, I wouldn’t have known that women are very active in adopting new ideas. They always want to practice what they are learning and it is very interesting. The women are highly motivated to learn because they have seen that I show concern about their problems.”