Women Leading the Fight Against Human Trafficking in Nepal

As part of the counter-trafficking efforts of the Hamro Samman project in Nepal, women are leading community engagement, awareness and advocacy efforts at the local level. Hamro Samman, supported by USAID and UK aid and implemented by Winrock International, aims to reduce human trafficking in Nepal. The project’s Leadership for Change (LfC) training equips at-risk individuals and survivors of human trafficking with the knowledge and skills to become champions of counter-trafficking in their communities. The training aims to build on their individual strengths and talents and hone leadership and networking skills. With support from partner civil society organizations and financial support from Hamro Samman in the form of micro-grants, LfC trainees go on to organize events and network with local government and civil society representatives. As Counter-Trafficking-in-Persons (CTIP) Champions, these local leaders generate awareness about human trafficking and its drivers and dimensions in the COVID-19 context through community engagement. They also advocate for the development and enforcement of policies, services and other needed interventions to reduce human trafficking. 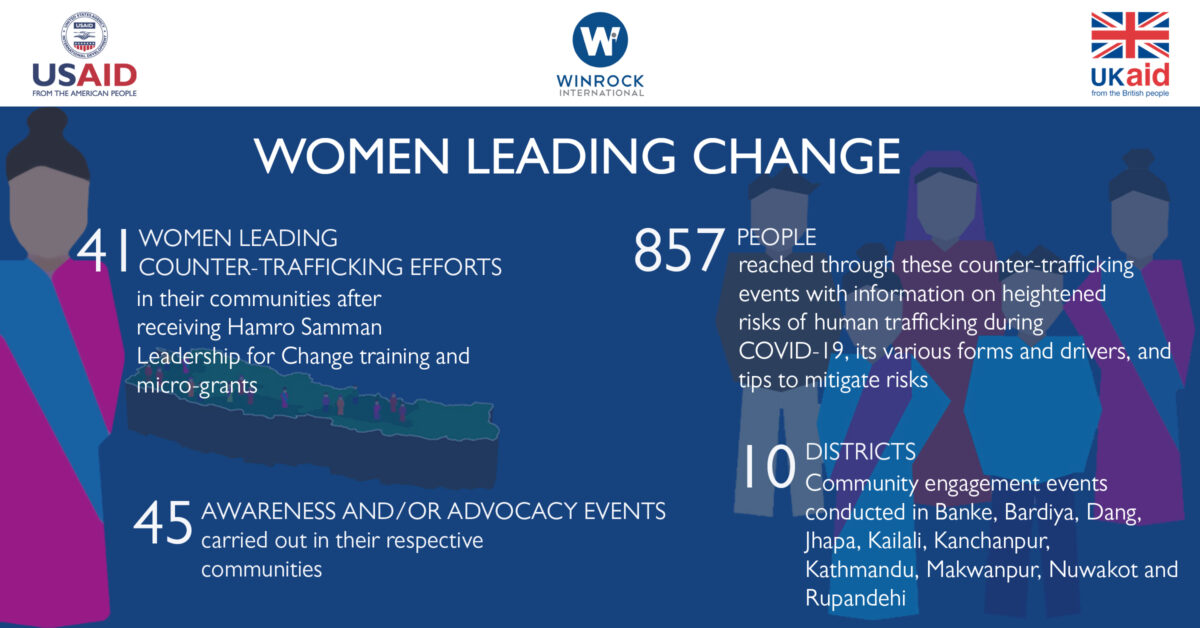 Here are excerpts from conversations with women leading counter-trafficking efforts in their communities: 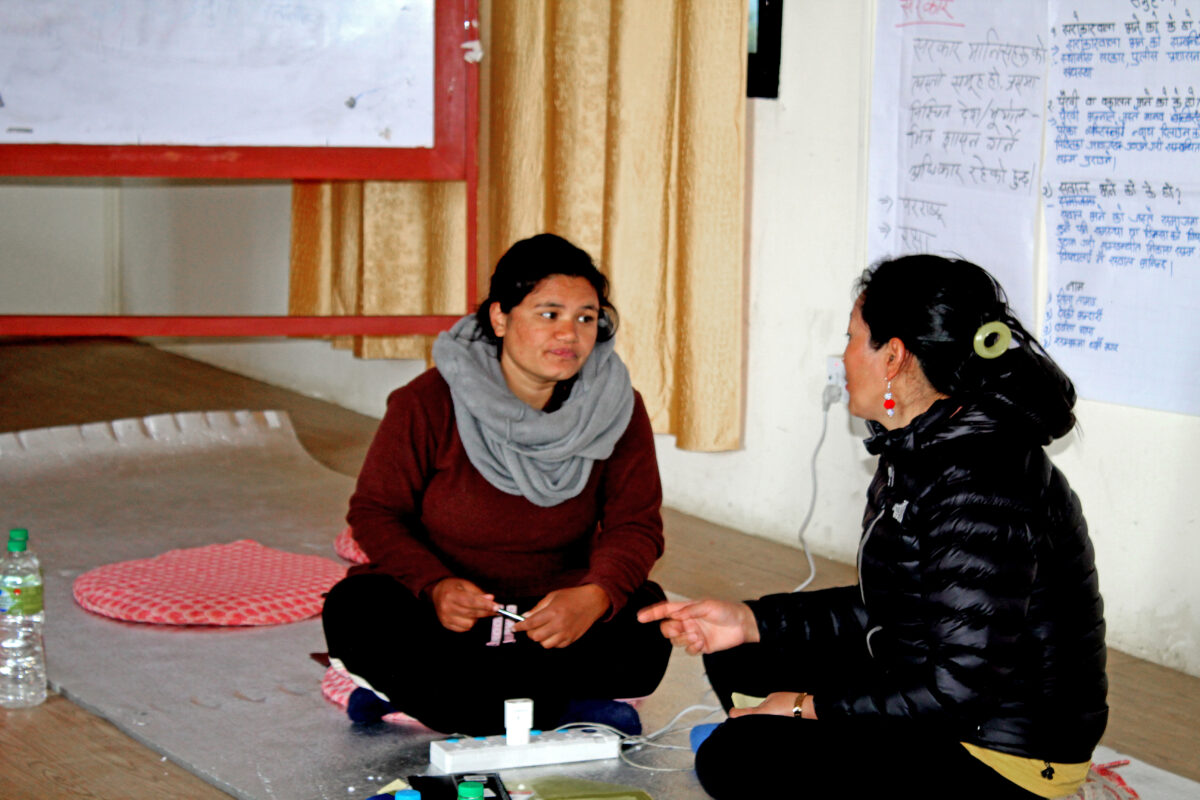 Devaki Bhandari, from Dandagaon in Sindhupalchowk, worked as a singer in a dohori restaurant in Kathmandu. Having learned how vulnerable she and other adult entertainment sector workers are to human trafficking in the Hamro Samman Leadership for Change training, she is now championing counter-trafficking efforts in her community.

“I think everyone who saw me on the first day of the training last year can see the difference. I was shy and afraid to speak up during the training, let alone speaking in public. The LfC training has helped me overcome my fear and made me feel that we need to speak up. I can now address large groups of people during community engagement events that I have led with micro-grants I received. I have clarity about human trafficking and human smuggling, and I am able to engage with the local government representatives who have encouraged me to take forward awareness and advocacy efforts.

Now that I have clarity about the levels of government in the federal structure and understand the roles of government bodies, I can advocate for interventions that our community and district need from relevant agencies.

Many people in my village who are uneducated and unaware of the risks they are taking are leaving for foreign employment. If I am nominated as a member of the Local Committee to Counter Human Trafficking to voice concerns of the at-risk groups and the survivors, I want to raise more awareness in the community so people are more aware of the risks of human trafficking.” 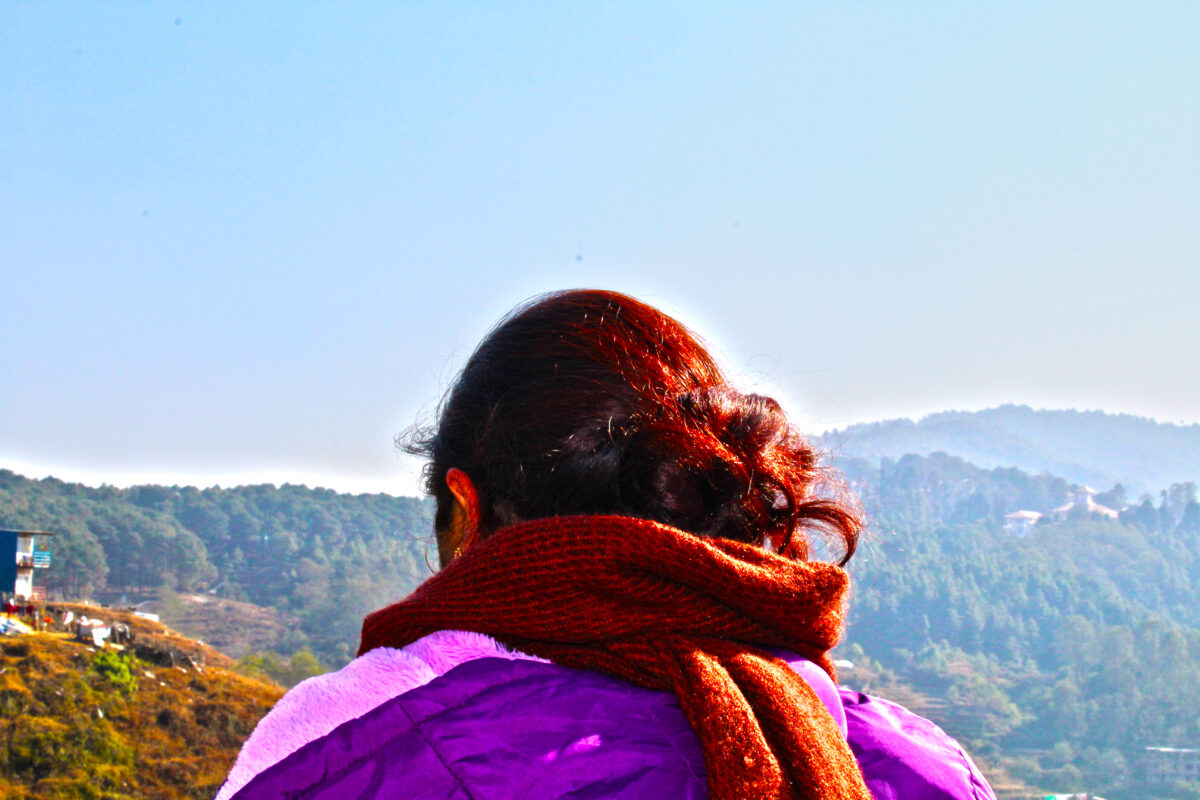 “It is not our fault that we are trafficked. We were naïve to trust our close friends and family members, and we hope that this mistake is not repeated. We have many individuals and civil society organizations supporting us and empowering us. Society should not look down on us. We are also capable of achieving new heights and becoming successful.”

This training has equipped me with self-confidence and knowledge to educate others about not just my bad experiences but various risks of human trafficking. I conducted an awareness event for 20 people about human trafficking and COVID-19. The attendees appreciated the knowledge I shared about migrating through official channels and have sufficient knowledge of the place of work. We all need to be extremely cautious since people who we consider dear to us can also take advantage of our vulnerable situations. As a Counter-Trafficking-in-Persons Champion, I am confident that I can impart some essential knowledge and generate awareness among survivors and at-risk individuals and also support them by helping boost their self-esteem.” 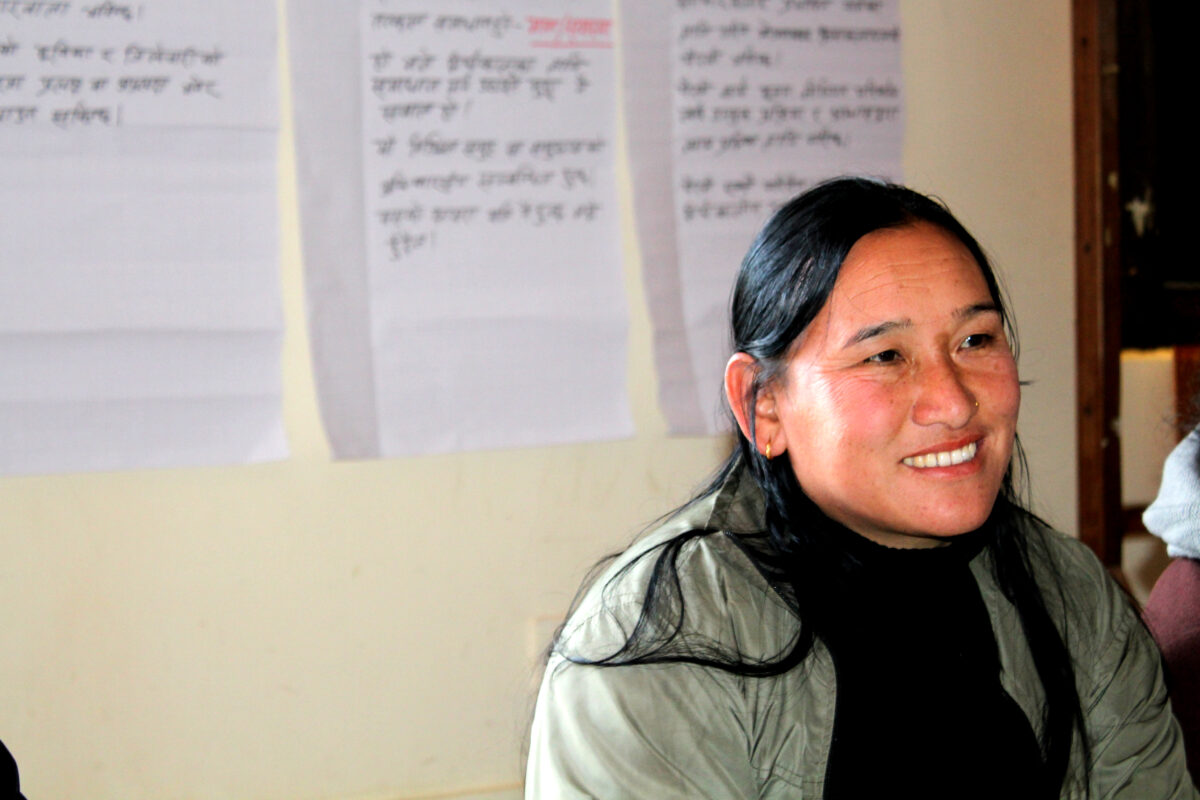 Roosh Maya Tamang from Nuwakot is a returned migrant who is working to counter human trafficking.  Having completed her LfC training a year ago, she has since conducted awareness programs for 48 women from her community on human trafficking in foreign labor migration and on the importance of safe migration.

“The knowledge and experience I have gained as a Leadership for Change trainee have helped me become confident and will help me in my advocacy activities. It has supported me in generating awareness about the risks of trafficking among vulnerable and at-risk individuals in my community. I have conducted events where I have engaged with 48 women to raise awareness on human trafficking and foreign labor migration. During the events I organized, I have highlighted the perils of human trafficking and various forms of exploitation faced during foreign employment in various labor destination countries. I strongly recommend aspiring migrants to use official channels for foreign labor migration and to approach only licensed recruitment companies to explore opportunities for employment in foreign countries.

Not just during the awareness events, I emphasize to everyone I meet that even men can be victims of human trafficking and exploitation and it is not only women who fall victim to human trafficking. I also refer fellow migrants to information applications and resources. I am confident that if presented with an opportunity to become a member of the Local Committee for Counter Human Trafficking, I will gladly take up the role since the Hamro Samman Leadership for Change training has equipped me with the needed knowledge and the micro-grant events have given me the experience of generating awareness and carrying out advocacy, which will help me to contribute to the fight against human trafficking.” 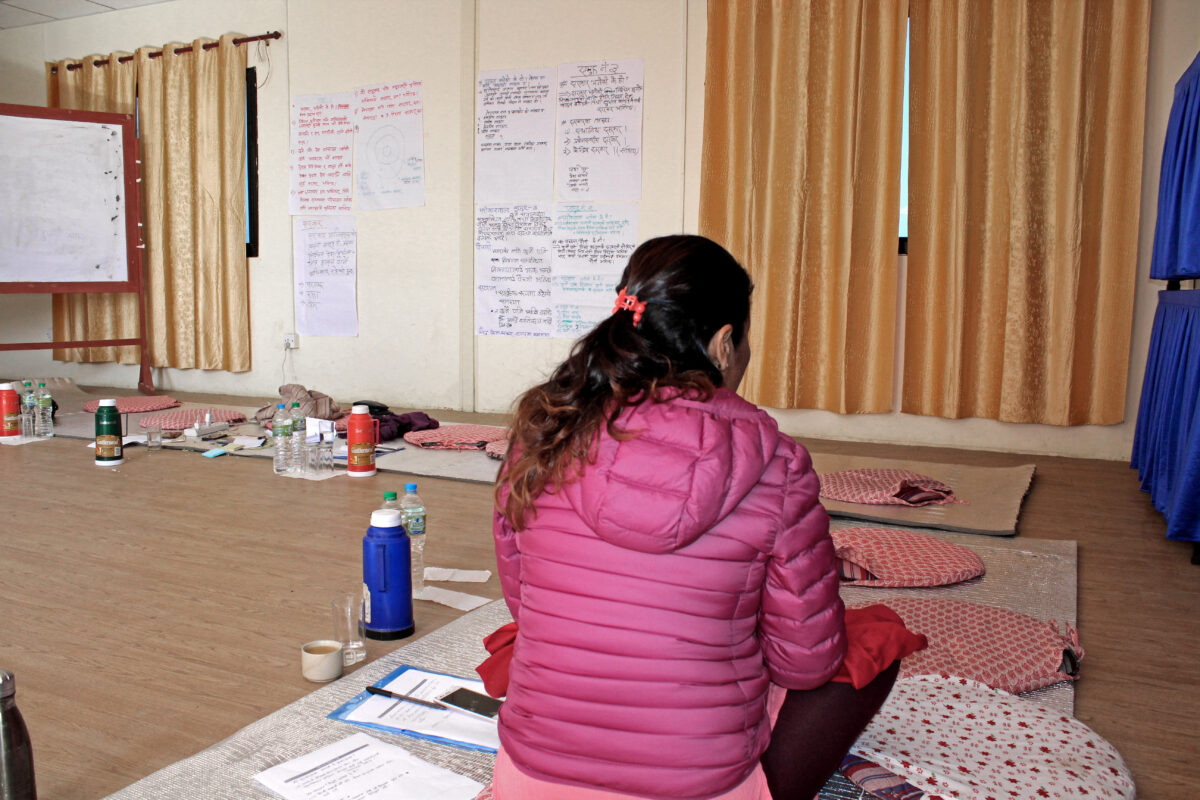 “If members of our family, community, and the country accept us with open arms and without any bias, then it will help us in healing our wounds and help us face life with renewed zeal. I urge all my sisters and brothers who are survivors that we have plenty of potential to do new things, and with hard work and persistence we can surely prove this to everyone.

The Leadership for Change training helped me understand the concept of human trafficking and its various forms, and also generated awareness about the issue among members of my community. I use the awareness events to share the knowledge I received with people in my neighborhood and community. I emphasize that trafficking is not just limited to sexual exploitation and may even occur through foreign employment or pursuit of higher studies in foreign destinations. I recommend to people wishing to travel abroad to adopt official and legal channels for migration since it is a safer option.  I believe that to effectively address this burning issue, governments, especially at the local level, should be more proactively involved.” 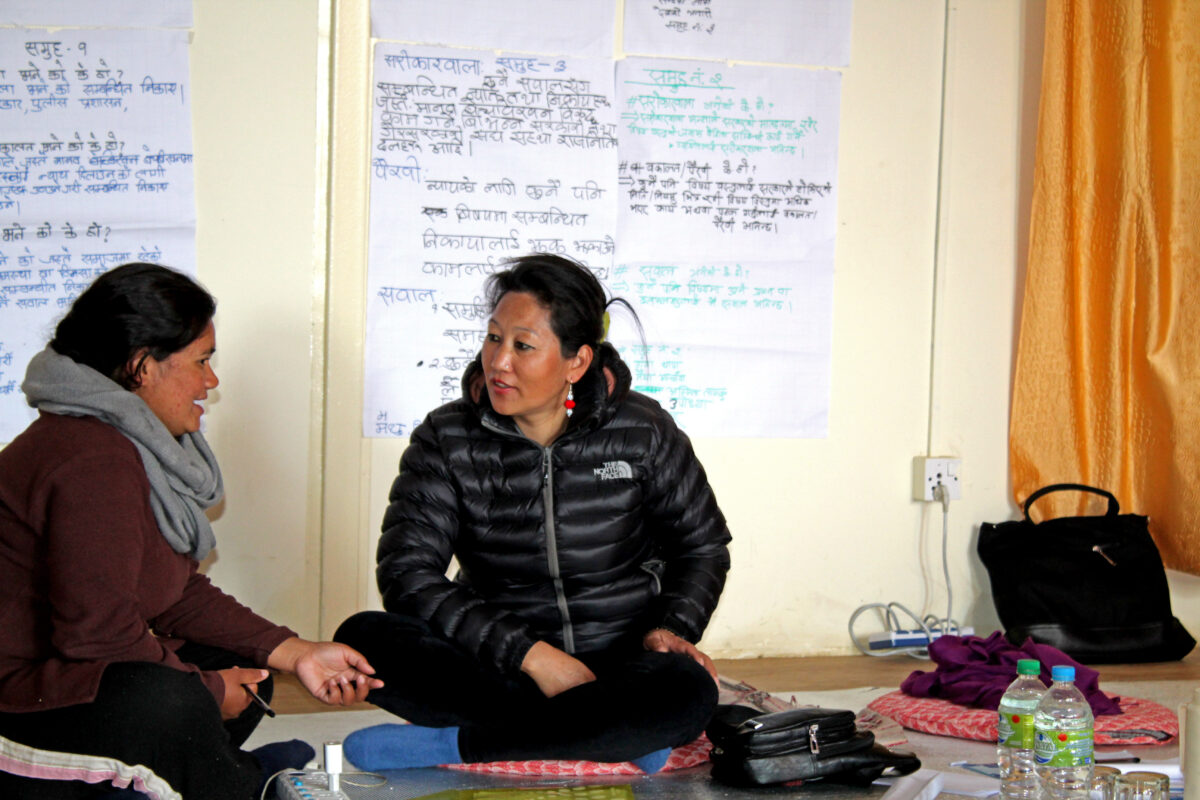 Madhu Gurung moved from Dolakha to Kathmandu and worked for 11 years in the adult entertainment sector. She is a Hamro Samman Leadership for Change participant who is now championing counter-trafficking efforts in that sector.

“I have been working since 2007 to support vulnerable entertainment sector workers and this training has equipped me to focus on countering trafficking in our sector. The entertainment sector has emerged as a high-risk sector to both domestic and foreign trafficking because many workers in the sector are exploited and vulnerable and are easy targets for traffickers. Workers, employers and even government stakeholders do not have clarity on the human trafficking that is prevalent in the sector.

I have taken several leadership trainings but, in this training, I have understood clearly about human trafficking and also learned the important skills that a leader should have. I am really clear now on the levels of government and what their roles are in the federal context. The biggest lesson I feel I learned from the training is that if we are not clear on how the government functions and roles of various agencies, we cannot engage them in our advocacy efforts. This clarity is going to support us in advocacy now.

One case that really highlighted to me how human trafficking affects workers in our sector is when more than a year ago some of our friends who also work in the entertainment sector shared that since their employer was not paying them, they decided to go to Dhangadi, which is in the Sudurpaschim province and has an open border with India on its south. Although we encouraged them to file a case against the employer, they refused and left the same day for the new job that was promised to them. Some three months later, I got a call from one of them saying that they had been shut in a room and had not been paid. I reached out to Maiti Nepal and they were rescued. So, I have seen domestic trafficking cases such as these.

It is important that Leadership for Change participants like me participate in local committees to counter human trafficking so we can voice our concerns and make others understand our concerns as well. If I am nominated as a member in the committee, I can work in various groups and clubs to bring clarity about human trafficking. My stand has always been that if working in the adult entertainment sector is acknowledged as dignified then human trafficking will not be as easy as it currently is.”