Mangrove forests are critical not only to the future of wild fisheries, but also to the fight against climate change.

Senegalese youth are repairing degraded mangrove forests. In the process, they are empowering fishing communities to safeguard their own livelihoods ─ and fight climate change.

It’s late August in Senegal: the weather has turned hot and wet. Even along the country’s Atlantic coast, daily highs hover around 90 degrees. Some of the national parks are closed. Tourists, along with migratory birds including Eurasian spoonbills, royal terns and greater flamingos have gone in search of milder weather further from the Equator.

As visitors take wing, teenagers from fishing communities in the Sine-Saloum Delta – a 445,000-acre estuarine region and U.N. Biosphere Reserve – take to foot. Their mission entails swishing through ankle-deep water in the tangled mangrove backcountry on the delta’s eastern reaches, not far from their homes in Toubacouta and Sokone. Every few feet, they stop to implant another long, cigar-shaped mangrove propagule halfway into the sandy mud.

They hope the already-germinated seeds will grow. If they do not replant and preserve the area’s shrinking mangrove forests – now ─ Senegal’s younger generation knows, their communities may not survive, because the fisheries will diminish; larval fish, as well as crabs and shrimp, will lose more critical breeding habitat in the oxygen-rich shallows under the mangrove canopies.

Here, as in other tropical coasts around the world, fish depend heavily on mangroves’ diverse ecosystems. The trees provide a food-rich habitat where juvenile fish are more likely to avoid predation under filigreed root systems, enabling fry and fingerlings to hide, breed, and eventually replenish wild fisheries. The trees’ partially submerged roots also build and bind soils, slowing erosion and protecting shoreline while filtering pollutants, including nitrates and phosphates flushed from rivers and streams into the estuary and ocean. 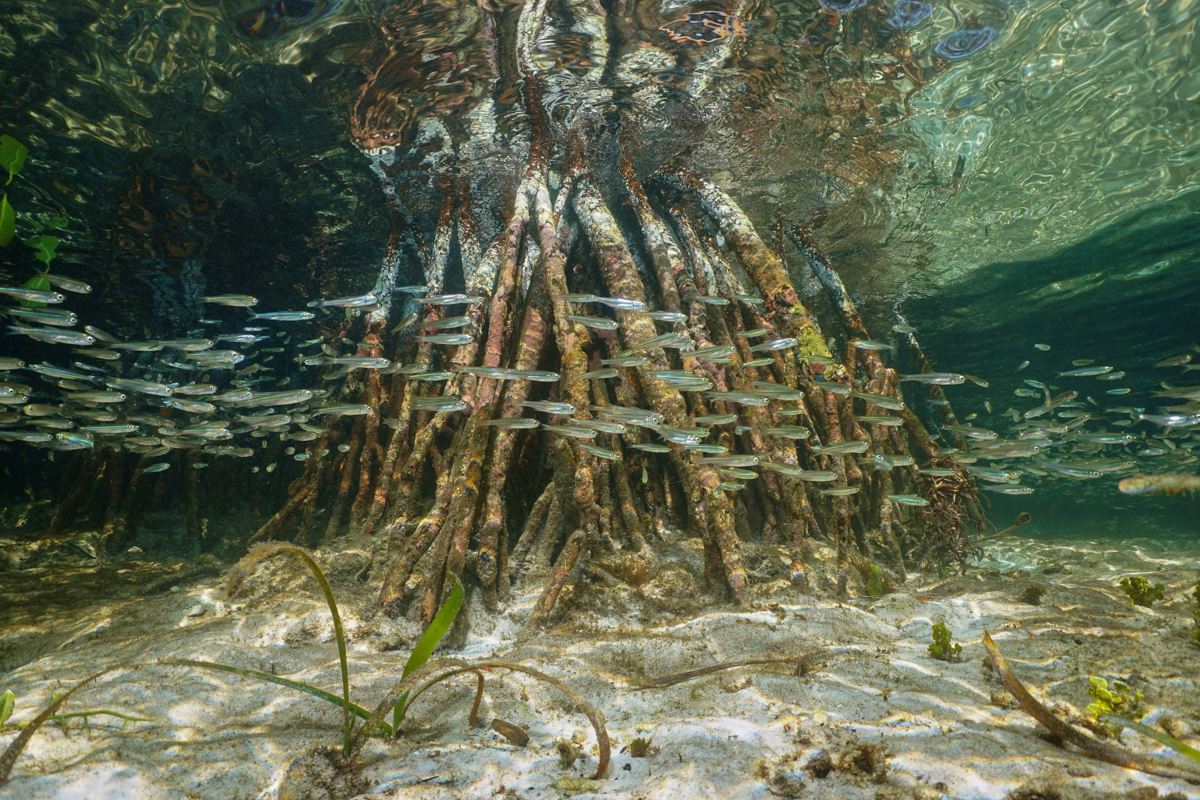 Along with myriad other species including crustaceans, mollusks, turtles, birds, and even Trichechus senegalensis ─ the African manatee ─ humans living on Senegal’s southern coasts also depend on the mangroves for food security; in all, nearly 3 million Senegalese rely on fishing for their livelihoods. People in Sine-Saloum also harvest honey from flowering mangroves, oyster farm amongst them, extract salt from the tidal flats and lagoons around them, and promote their lush beauty for eco-tourism.

Despite the clear benefits, Senegal’s mangroves have been heavily degraded over the past half-century, with reports estimating up to 30% of the delta’s mangroves have already been eradicated by agriculture or other development, or damaged by climate change-related extreme weather, erosion and sea rise.

Protecting fish nurseries and preserving marine ecosystems like mangrove forests are important elements of the USAID Feed the Future Senegal Dekkal Geej activity. Implemented by Winrock, Dekkal Geej, which means “Restoring the Sea” in Senegal’s national language, develops and strengthens partnerships with communities including youth and women, businesses, and government to improve fishery management and ecological sustainability of stressed marine resources, with the overarching goal of improving food security.

Mangrove reforestation efforts like those facilitated by Dekkal Geej also engender agency and activism, by linking youth groups to community leaders and advocates of sustainable fishing through Local Councils for Artisanal Fisheries (CLPA). In Sine-Saloum, the Sokone and Toubacouta CLPAs reached out to local Youth Sports Association leaders, who recruited 65 young members for the reforestation initiative, which was overseen by staff from the Marine Protected Area.

“Because mangrove ecosystems play an important socio-economic and ecological role, their restoration will have many positive impacts,” said Ibrahima Nidiaye, a local leader who was involved in the effort. “The  participation of young people in mangrove reforestation is a way to get involved in the management of natural resources and to ensure a sustainable future.”

Such collaborative activities, and others that protect and promote biodiversity, are strengthening the resilience of Senegalese communities as they adapt and adopt strategies to slow climate change and its impact on local ecosystems. In addition to reforestation, Dekkal Geej has worked with local partners to conduct trainings on management of seagrass beds, which also provide critical habitat for fish, crustaceans and other marine life, as well as beekeeping. Honeybees and other pollinators are vital to the survival of mangroves; in the Sine-Saloum area, apiculture is a good livelihoods option that also supports biodiversity in the islands and terrestrial zone, where people traditionally harvest honey from wild swarms.

In addition to their importance to fisheries, mangroves are a keystone asset in the battle against climate change.

Their arched roots and the calcareous muck that supports them sequester unusually large volumes of carbon, preventing its release into both the atmosphere and water. Scientists have learned that mangroves absorb up to four times more carbon by area than terrestrial forests. Conversely, when mangroves are damaged or removed, the ecosystems they prop can collapse, releasing carbon dioxide, a greenhouse gas and driver of climate change.

Reforestation and other ecosystem protection work in areas impacted by climate change are examples of Dekkal Geej’s support to communities as they develop, update and implement Local Climate Change Adaptation Plans in Sine-Saloum and other coastal regions, including Grande Côte Nord, Petite Côte and Casamance. Developing the plans and assessing their effectiveness in building resilience to climate change are part of a broader, Senegalese government effort to establish a National Plan for Adaptation to Climate Change in Fisheries and Aquaculture.

“The biodiversity of the species fished in the Saloum Delta is strongly linked to the existence of a mangrove ecosystem that plays its role well,” said Nidiaye. “However, this ecosystem is threatened by anthropogenic actions [such as] excessive cutting for smoking fish, and natural phenomena [including] drought, salinization of land and climate change. Reforestation is a necessity for the resilience of the mangrove ecosystem …[and] for … sustainable fisheries.”

Supporting ecological sustainability and protecting biodiversity are important components of the national adaptation plan, and both pieces fit into Dekkal Geej’s goals as the project works to improve fisheries management and promote food security through a combination of policy-shaping work and community action.

Senegal is now the second-largest fish producer in West Africa. The growing number of fishers in the country, along with increased global demand, is resulting in overexploitation of fishery resources, threatening the regenerative capacity of some species. Those stressors effect local market supply and prices, which impact food security and nutrition.

“The smoker not only reduces the environmental impact of processing, it also improves food safety and reduces loss of fish from spoilage,” Baker wrote in a June 2021 post on LinkedIn. “Women-owned processing groups now have a nutritious food source for their families and a reliable source of income.” 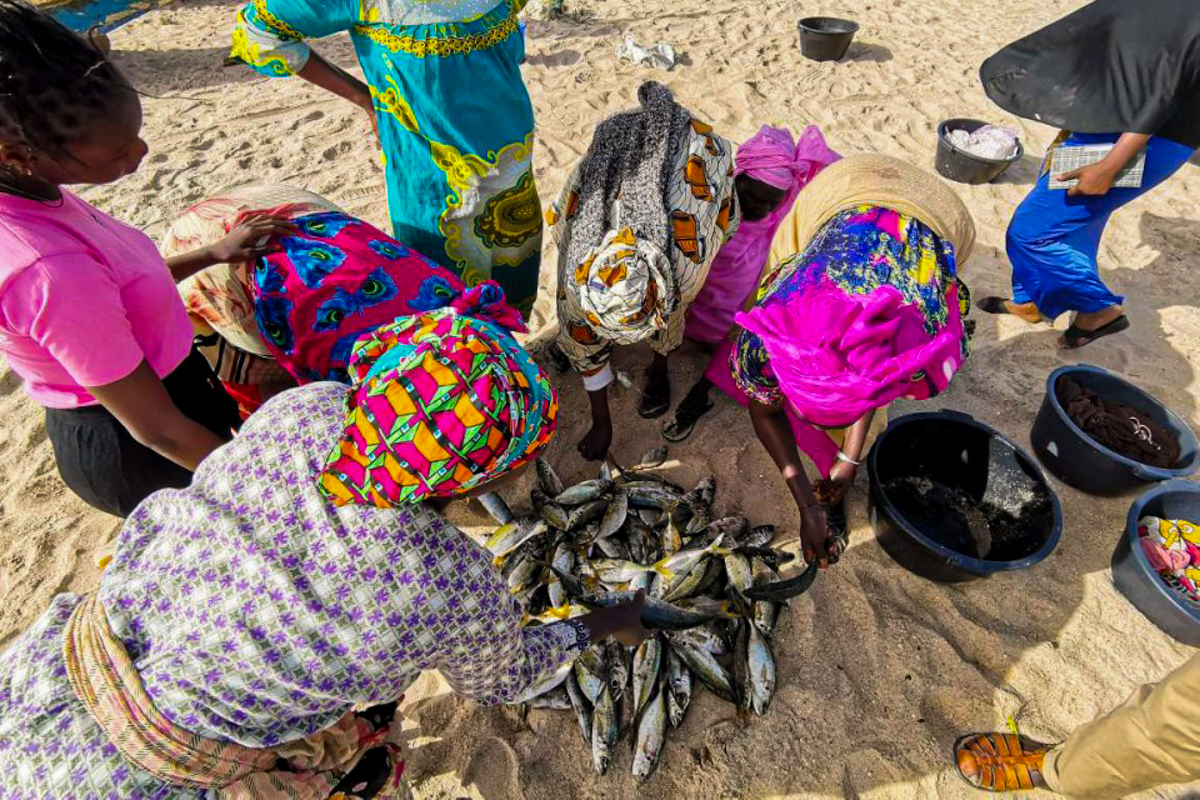 Women-owned processing groups now have a nutritious food source for their families and a reliable source of income. Photo credit: Dekkal Geej.

Fish, of course, are important contributors to food security, but not just as a source of protein. They provide an array of essential fatty acids, nutrients, minerals and vitamins including B12, which is important for cognition, growth and brain development in children.

Senegal’s next generation is investing its brainpower, along with time and energy, to develop strategies and action plans to help their own communities both better manage fisheries and preserve ecosystems.

Dekkal Geej surveyed nine youth groups to gauge their interest and gather details about which activities they are prioritizing for action. Four of the nine groups cited a desire to engage in mangrove protection and rehabilitation amongst other initiatives, while other groups included plastic pollution and cleanup, improved sanitation, erosion control, artificial reef construction and boosting community environmental awareness. To reach youth and women with information about fisheries management trainings and news, and to empower them to become informed participants in local decision making, Dekkal Geej works with Viamo, a digital technology and social enterprise with West African roots.

Senegalese youth are hearing – and heeding – calls to action. “We intend to continue this activity every year,” Nidiaye said, “to … increase the reforested areas, because this mangrove ecosystem plays a preponderant role in the reproduction of fish.”

Dekkal Geej builds on the success of other USAID projects implemented by Winrock that contribute to food security and protect natural resources. In Bangladesh, the Climate Resilient Ecosystems and Livelihoods activity worked with government, local organizations and communities to conserve seasonally flooded wetlands and the important fish species found there, while the Vietnam Forests and Deltas activity worked with the Government of Vietnam to develop a payment for forest ecosystem services initiative that mobilized over $400 million to conserve forests for water services. Combined with ongoing, market-oriented projects including the Feed the Future Nigeria Agriculture Extension and Advisory Services project and the Knowledge-based Integrated Sustainable Agriculture and Nutrition activity in Nepal, Winrock is working with communities, public- and private-sector partners to build a more food-secure, climate-resilient future.