As leader of the Vietnam Forests and Deltas Program, Brian Bean works to strengthen ties between people and the natural world

When Brian Bean was growing up in Maryland, he knew exactly what he wanted to do as an adult. And in many ways, his career aim was to basically re-create a boyhood spent climbing trees, looking under rocks for salamanders, and roaming the woods in and around Susquehanna State Park.

Not surprisingly, Bean’s childhood wanderings through Maryland’s forests prompted him to pursue an education focused on better understanding the natural world. And all was progressing according to plan by the time Bean entered his senior year at Pennsylvania’s Haverford College. By completing just one more year of school Bean would have the B.A. in biology he needed to land a job as a research scientist.

But it was actually in a research lab — a place Bean fully expected to spend a large chunk of his professional life — where he had a rather jarring epiphany. “I realized I spent most of my time looking out a window rather than looking into a microscope,” recalls Bean, as he stands in the cooling shadows cast by a sprawling Tung tree in the otherwise hot and steamy air of Cat Tien National Park in Vietnam, a country he has lived in since becoming chief of party for Winrock’s USAID-funded Vietnam Forests and Deltas (VFD) Program in 2016. “I realized that I was missing the connection to people.”

It wasn’t as though Bean wanted to do a complete U-turn and become, say, a cruise ship director or a car salesman. Instead, he wanted to find a way to connect his interest and knowledge of the natural world with a desire to improve people’s lives.

Once Bean realized that his dream career trajectory was missing something important (i.e., actual human contact), he set about filling that void. As has been the case with generations of newly-minted college graduates before him, Bean’s knowledge of the natural world and impulse to better the lives of others led him to a two-year stint in the Peace Corps.

For someone who had dreamed of a job that would allow him to do the adult equivalent of playing in a forest, the two years Bean spent in Zambia were pretty close to ideal. There, he helped Zambian fish farmers do everything from construct and stock their ponds to harvest and market their fish. “I spent a lot of time in Zambia in flip-flops digging in the dirt with a hoe and getting really sweaty and dirty,” he says. “I appreciated that connection to the communities and to the land and to the fish we worked with.”

After his time in the Peace Corps was finished, Bean briefly attempted to get back into scientific research. But he realized that strengthening the beneficial connection between nature and people was what he really wanted to do. And in varying capacities across 25 countries — including enough time in Africa to become fluent in the Bantu dialect, Kiaonde — that is exactly how Bean has spent the past 15 years of his career. 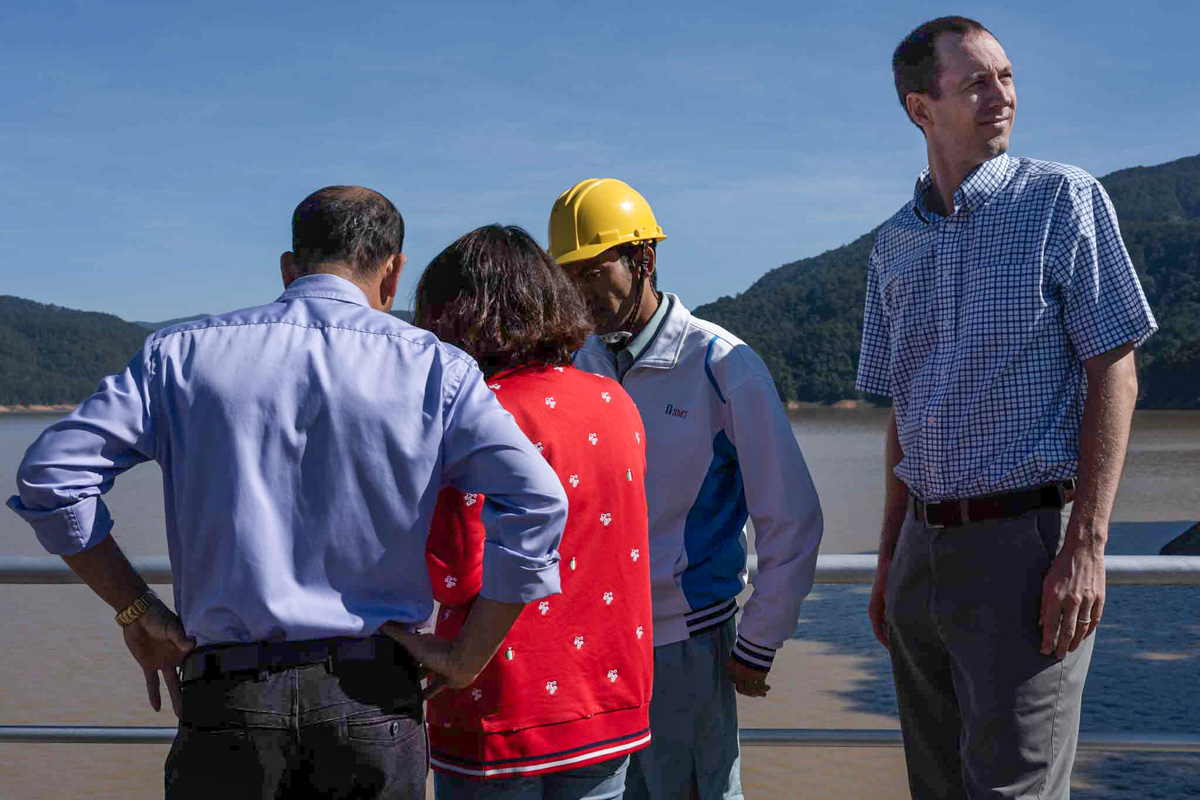 As the Vietnam Forests and Delta Project’s chief of party, Bean’s main responsibility is to oversee the nation’s Payment for Forest Environmental Services (PFES) program.

Over that time, Bean has used the technical skills developed in forestry, biodiversity, environmental impact analysis, and climate change to help fish farmers in Nigeria and Moldova, small palm oil producers in Liberia, and farmers in Nepal.

Before coming to Vietnam, Bean served as Winrock’s chief of party for the USAID-funded Lowering Emissions in Asia’s Forests (LEAF) Program, which worked to sustainably reduce greenhouse gas emissions from the forestry and land use sector in six nations across Southeast Asia and the Pacific.

A career animated by the conviction that a healthy natural world tangibly improves people’s lives has been the ideal preparation for Bean’s role leading VFD. Bean’s main responsibility is to oversee the nation’s decade-old Payment for Forest Environmental Services (PFES) program, a landmark initiative that has simultaneously helped Vietnam conserve its forests while also improving the livelihoods of hundreds of thousands of rural, mostly ethnic minority and economically disadvantaged people.

PFES recognizes that forests have quantifiable value — be it from their natural beauty, capacity to sequester carbon or as a tool to protect watersheds — and provides financial compensation to the people and communities that protect them. Winrock has partnered with the Vietnamese government since PFES was piloted in 2006, when just over 200 households in Lam Dong province received compensation for protecting forests. Today, PFES provides around $130 million annually to over 500,000 households across Vietnam for that work —  a job that involves regular patrols to keep an eye out for illegal logging, animal poaching and fires. 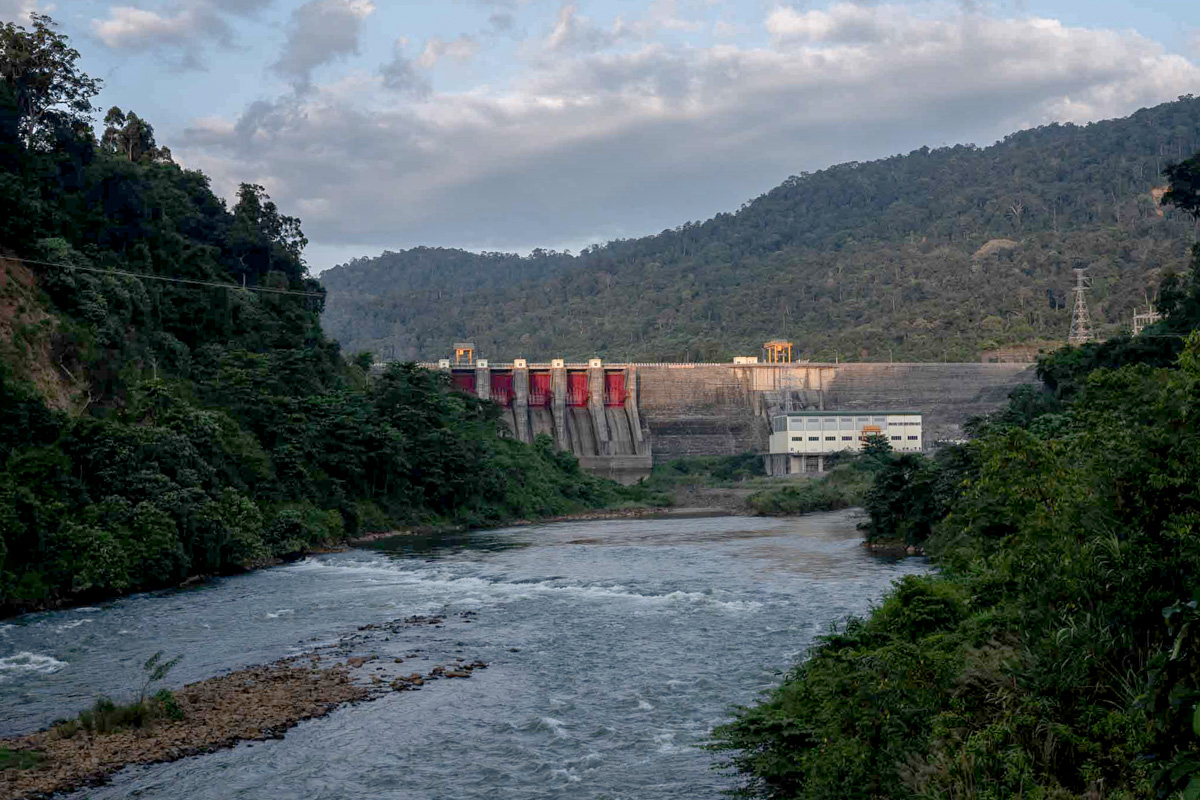 In return for watershed forest protection, utilities pay a small fee for each kilowatt-hour of electricity their facilities generate.

Vietnamese hydropower plant operators have been the major beneficiaries of healthy watersheds. “That service is reduced sedimentation and more consistent water flows through their facilities,” says Bean. “If those forests were cleared, there’d be a lot more runoff, there’d be falling timber that could clog up their operations, literally. They don’t have to dredge as much and they can maintain a more consistent operation in their production.”

In return for watershed forest protection, utilities pay a small fee for each kilowatt-hour of electricity their facilities generate. If satellite imagery and field studies confirm that community patrols have maintained forest cover, that money is then distributed to households by provincial governments.

The payment amounts vary, but can be as high as about $1,000 per year for a household. “That’s quite a significant impact in terms of a child’s education or different livestock and livelihood investments that can help people and their families,” says Bean.

As chief of party, it is Bean’s job to both ensure that PFES is functioning effectively and to work with the government to evolve the program to become even more impactful. Some of the responsibilities are predictable: overseeing a staff of 15 in Hanoi; updating USAID on project accomplishments and challenges; and collaborating closely with counterparts in the Vietnamese government who are responsible for PFES. “Everything we do is working side-by-side with Vietnamese government counterparts,” he says. 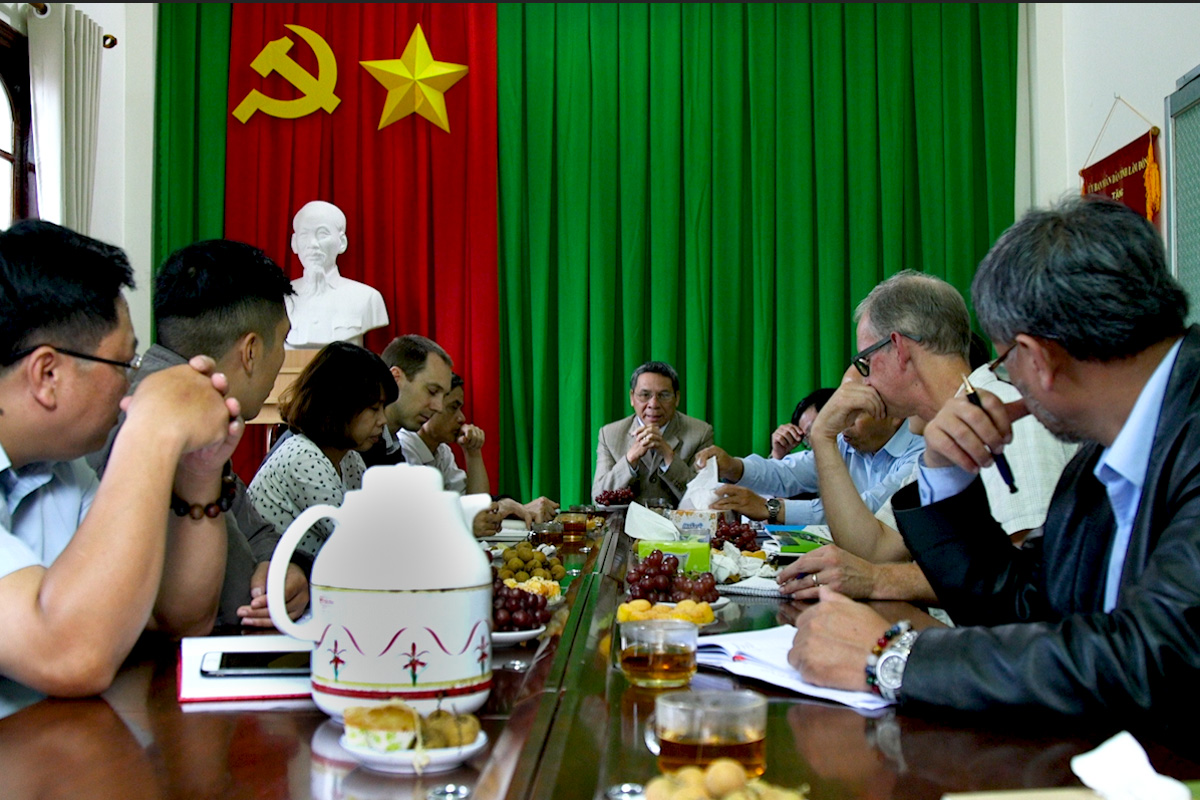 Bean, fourth from left, works closely with members of the Vietnamese government.

That collaborative approach to managing PFES has some downsides in terms of added bureaucracy. But Bean believes the benefits far outweigh any negatives. “I have a number of colleagues in Winrock who work in other countries who would die to be in my situation because they work in countries where, no matter how much they do, no matter how much they try, they can’t get the government’s attention,” he says. “I see it as a really unique way to work that actually helps ensure the long-term sustainability and institutionalization of a lot of our work here in Vietnam.”

Currently, Bean and his staff are focused on supporting efforts to expand the scope of PFES to include an increasingly vital service forests provide: carbon sequestration. VFD and the Vietnamese government are now working to develop pilot programs in four provinces where large emitters of carbon dioxide, such as coal power plants and cement manufacturers, pay communities for the carbon sequestration forests provide. Winrock has provided technical guidance about how to calculate the amount of carbon forests can sequester and how that translates into payments to communities and to meet Vietnam’s commitments under the Paris Climate Agreement. Other priorities for the project include introducing e-payment mechanisms for PFES beneficiaries in order to improve efficiency and transparency, as well as improved monitoring and evaluation of the program.

While his duties and responsibilities will certainly sound familiar to other Winrock chiefs of party, the way Bean executes them is very much shaped by the unique culture of Vietnam. After all, this is a country where business is conducted with a mix of extremely formal ceremonies and more casual personal relationships. Which means a typical week will often require Bean to deliver a prepared statement to a roomful of government officials and then cultivate the personal relationships necessary to get things done after-hours. “Vietnam is a place that really values those informal interactions outside of the office,” he says. “I have always been someone who is a bit reluctant to take a microphone in a karaoke club. But I have had more than one occasion where I needed to step forward.”

Though his job does get Bean out into the forest from time to time, the reality of his work means he spends most of his time in Hanoi office buildings. But even as he finds himself in meetings, signing papers and managing his office staff, Bean always remembers how those tasks serve the purpose he has pursued throughout his career. “That connection to nature and to people is something that has always been really important to me and my work,” he says.