Summit Spurs Agricultural Innovation in Bangkok and Beyond

Most people have never heard the sound of a fish having dinner, but Gibran Huzaifah has. And when he described it for a receptive audience at last month’s inaugural Asia Regional Agriculture Innovation Summit in Bangkok, Thailand, he brought down the house.

“We put a little microphone inside the water that can hear the little yum yum sound when the fish is eating,” said Huzaifah, CEO of eFishery, an Indonesia-based aquaculture technology company. “When the fish are done we stop the feeding.”

Huzaifah was a fish farmer himself when he started thinking about a machine that could sense fish appetite and adjust food accordingly. The device saves tens of thousands of U.S. dollars per farm, he said, “and for a fish farmer this is a huge amount of money. …We believe that technology can and should be a solution.”

It’s for just such innovations that the Asia Regional Agricultural Innovation Summit in Bangkok, Thailand, was convened. The summit brought together an unlikely mix of participants from 15 countries across Asia — social entrepreneurs, researchers, government experts, farmers, fishers and more — to kick off a five-year initiative to promote innovative agricultural technologies in the region.

The event was “absolutely” what he hoped it would be, says Rob Turner, director of the Feed the Future Asia Innovative Farmer’s Activity, which organized the summit along with Winrock International. “People said they found it very energizing and inspiring to have the viewpoints of people they don’t normally talk to.” 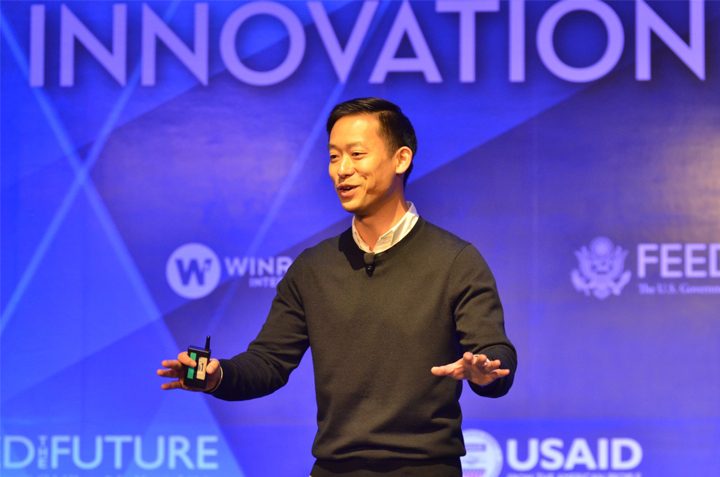 IDEO’s Michael Peng lights up the room with “design thinking” at the Asia Regional Agriculture Innovation Summit in Bangkok, Thailand.

That included Michael Peng, co-founder and co-managing director of IDEO Japan, which has brought principles of design thinking into industries ranging from education to consumer electronics. Combine design thinking with agriculture and you have the Magic Stick, a device Peng introduced at the conference that measures soil temperature, GPS and moisture levels. Peng talked about the importance of innovation and how design thinking can be used to tackle some of our biggest challenges.

Statistics show that agricultural production will need to increase by 50 percent between now and 2050 in order to feed the population, Turner says. Whereas in the past, production could be boosted by using more fertilizer or seed, “for the last 20 years the real driver of productivity has been technology, getting more from what you have, getting more from less,” he notes. 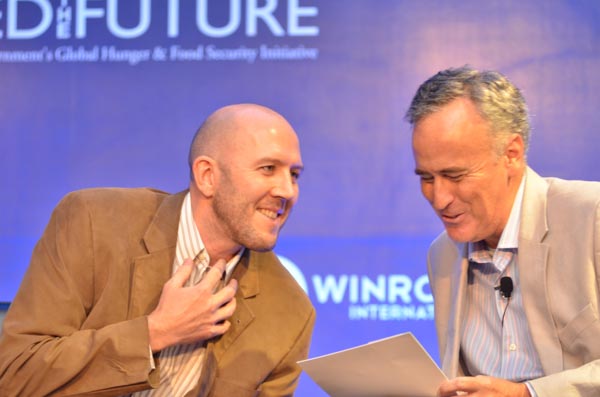 Kipp Sutton of USAID and Rob Turner of Winrock International share a laugh from the stage.

And that requires the sort of creative disruption the summit inspired. “I knew that making this event happen would require us to work differently, to work across disciplines and geographies, across siloes and budget areas to accomplish something together that we could never do alone,” says Christopher “Kiff” Gallagher Jr., Winrock’s vice president of business development and external affairs and a key organizer of the summit.

The event featured not only experts from USAID, FAO and the like but also Tri Nguyen of MimosaTEK, creator of a precision irrigation system that uses sensors, smartphones and the Internet of Things, and Johan Van Asbrouck of Rhino Research, whose small drying beads absorb moisture from seeds and grains and help prevent storage loss. 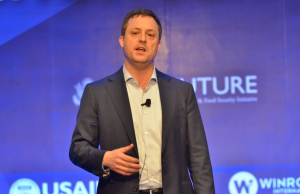 “It was the first time we were able to do a session like this that brought in the funders, the tech designers, the people identifying the constraints and the people who have the ability to take this to the mainstream,” said Winrock’s Senior Vice President of Programs Joyjit Deb Roy. “It was almost like a marketplace for ideas.” And like a marketplace, it had tangible pay-offs, with new connections and possible deals for the cutting-edge entrepreneurs.

But the summit itself was just the beginning. The Tech4Farmers challenge that was launched there will help develop technological solutions and regional partnerships for smallholder farmers in Bangladesh, Cambodia, Myanmar and Nepal. And there will be regional meetings in each of these countries, too. 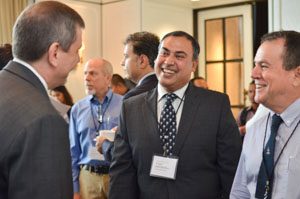 Winrock’s Joyjit Deb Roy (center) with Todd Sorenson of the USAID Regional Mission for Asia (left) and William Collis of the International Maize and Wheat Improvement Center (right) during a break.

In its focus on technology the summit was also addressing another major concern — the aging of the Asian farmer. “A lot of young people [in Asia] don’t see agriculture as their future. They don’t see themselves … taking over the family farm,” says Justin Finnegan, deputy assistant to the administrator in USAID’s Bureau for Food Security, who spoke at the summit’s opening plenary session. “They need to see agriculture as an opportunity, not just something of the past.”

An emphasis on technology will help reverse this trend, Turner says. In fact, some participants saw the event itself as proof of this. “It was very refreshing to hear a lot from company startups,” says Elvie Grace Gelman of the agriculture company Syngenta. “It’s so good to see that young people are becoming more interested in agriculture.” 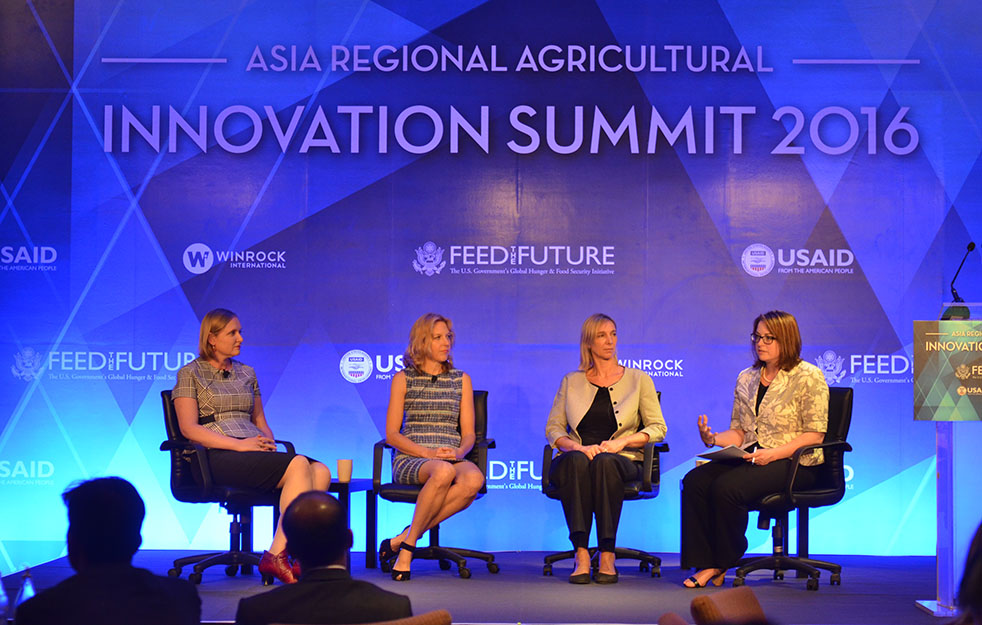 A panel on “Social Accountability in Supply Chains” was a conference highlight.

Expectations are high as participants look forward to the regional summits. Everyone seems to agree that what happened in Bangkok was a rare synergy. Said Finnegan, “Being here today and learning what some of the companies are doing is really fascinating and something the whole world can learn from and benefit from.” And Kipp Sutton of USAID, who delivered the summit’s closing remarks, said, “This is the first time we’ve brought everybody together like this. … We were very happy with the engagement we had. … Many minds are better than one.”