Forests perform a vital ecosystem service by providing conditions for abundant, clean water supplies and healthy soils. The vegetation in forests slows the flow of water across the earth’s surface, better allowing it to be absorbed into soils and stored as groundwater. The vegetation also controls soil erosion and nutrient runoff. Deforestation and changes in land use disturb soils, causing water pollution, threatening groundwater resources, leaving agricultural areas deficient of healthy soils and making soil more vulnerable to erosion and nutrient loss.

In Cambodia and around the world, people rely on water stored in underground aquifers for drinking water, irrigation, aquaculture and industrial water supply. Groundwater provides a useful alternative to surface water because its supply is more consistent throughout the year, even in the absence of monsoon rains. 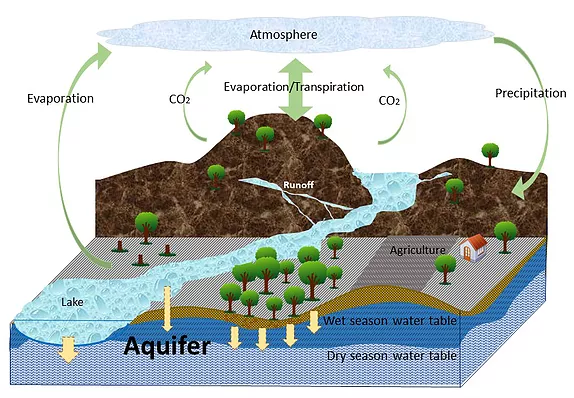 Aquifer recharge is an important component of the water cycle, and is dependent on complex relationships between precipitation, evaporation, land use, soil characteristics and topography. As the above diagram illustrates, precipitation delivers water from the atmosphere, which may flow into streams and rivers, evaporate back to the atmosphere, get taken up and stored by plants, or seep down through soil to aquifers (ground water infiltration). Forests offer an important ecosystem service, as they help to regulate aquifer recharge rates.

Aquifer Depletion
In many places, including the Mekong Delta, growing population pressure and demand by agriculture and industry have resulted in the overuse of aquifers. In many places, water tables (the highest point of water saturation in the aquifer) have lowered, leaving wells dry. Shallow aquifers, such as those in the Mekong Delta, also supply water to rivers, so their depletion has implications for aquatic life as well. One study observed average water levels in wells decline by 14 cm yr-1 in Prey Veng and Svey Rieng between 1996-2008 [1].

The key to determining sustainable groundwater use depends on understanding how much is replenished. Yet the process of water movement through soil layers is highly complex and depends on a number of interacting environmental factors. 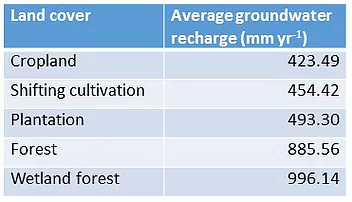 The Soil and Water Assessment Tool (SWAT) computer model was used to estimate the annual groundwater recharge values in Cambodia. It uses data on climate, topography, land cover and soil to simulate the hydrologic cycle and predict the quality and quantity of surface and groundwater. To learn about how this model was validated, see the ‘SWAT Model Validation’ section at the bottom of this webpage.

The analysis showed that the removal of land covers with higher vegetation cover, such as forests and wetlands, causes decreased groundwater discharge in the Mekong River Basin. The WESTool integrates the results of this analysis in its estimates of groundwater recharge, and reflect rates summarized in the table to the right.

Sediment Loss
Sediment is comprised of small pieces soil material and nutrients that can be transported across a landscape by wind and water.

Erosion and deposition are natural processes whereby sediment is removed from a location and deposited elsewhere. Sediment that is moved by water, or ‘fluvial sediment transport’, is an important process around the world, and especially in temperate and tropical regions such as Southeast Asia where there is a lot of annual rainfall. 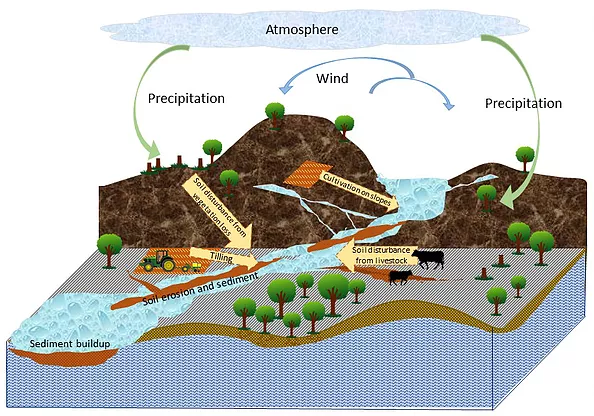 Erosion occurs naturally, but human activities that disturb soils accelerate sediment loss. Land use change, construction, agricultural practices, and livestock break soil up into smaller pieces and make it more susceptible to movement by wind and water. Erosion increases when trees, shrubs, and grass that form a protective layer for soils are removed. Forests and vegetation offer an important ecosystem service by mitigating erosion and sediment loss since they absorb rainfall, hold soil in place with roots and stems, and slow overland flow of water and wind. In Southeast Asia, studies have indicated that deforestation can cause sediment loss to increase by up to an order of magnitude from

Soil and Water Assessment Tool (SWAT) computer model was used to estimate sediment loss in Cambodia. It uses data on weather, topography, land cover, and soil to simulate the hydrologic cycle and predict the amount of sediment lost. SWAT results for sediment load are summarized by land cover type in the table to the right. The numbers vary considerably depending on slope and soil, but the averages can represent erosion rates on different land cover, with croplands and plantations having 6-7 times greater sediment loss than forest. To learn about how this model was validated, see the ‘SWAT Model Validation’ section at the bottom of this webpage.

Nutrient Loss
Nitrogen and phosphorous are essential nutrients for both plants and animals. They form key components in many fertilizers and are applied in large quantities to support a wide variety of agricultural products. When excess amounts of these nutrients flow into water bodies, it can be harmful to aquatic ecosystems and human health.

The process by which high levels of nitrogen and phosphorous build up in water bodies is called eutrophication. Eutrophication can lead to the rapid growth of algae, which feed on these nutrients and compete for available oxygen with other aquatic life, threatening fish populations and harming ecosystems. For dam reservoirs and areas such as Tonle Sap Lake in Cambodia, this type of water pollution could lead to devastating fish die-offs, as well as negative effects on water potability and human health. 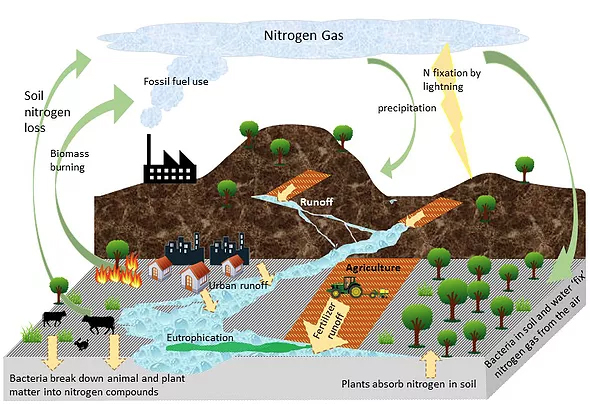 While fertilizer applied in agriculture and aquaculture is a large source of nitrogen and phosphorous pollution, urban runoff and wastewater also contribute. Nitrogen pollution may also come from animal manure, raw sewage, and wastewater treatment plant effluent. The diagram above demonstrates how nitrogen moves through the environment. Erosion from storms and other types of soil disturbance can flush nutrients from fertilizers and sediment into waterways. This is referred to as “non-point source pollution.” Forests offer an important ecosystem service in reducing nutrient pollution, as they mitigate erosion and help absorb stormwater surges. Forests and other types of vegetation form a protective layer for soils, absorb rainfall, hold soil in place with their roots and stems, and slow the overland flow of water and wind. Where there is a single source of pollution into a waterway such as a pipe or sewer, it is referred to as “point source pollution.”

As sediment and nutrient loads are highly correlated, the results showed that overall water quality is negatively affected by deforestation. While variability between watersheds is high, on average, for every 10 percent of forest lost in a watershed, the sediment load in the rivers increases by almost 50 percent. Some watersheds in Cambodia have experienced almost 40 percent loss of forest between 2000 and 2013, resulting in an almost 200 percent increase in sediment.

To validate the SWAT analysis, results were compared to actual measurements of hydrological behavior of Cambodia’s watersheds. These variables, such as river flow and measured sediment and nutrient loads in water bodies, are highly correlated with SWAT outputs, and thus can be used to validate the model.

River flow is an important hydrological variable in watersheds, and SWAT modeling of river flow was generally in agreement with measurements from the Mekong River Commission. SWAT results on sediment yields fell within the range of values reported in the literature (Sidle et al. 2006)[3] for different land uses in Southeast Asia. The same study confirmed SWAT results showing considerably lower rates of erosion in forested areas as well as the effect of slope.

Furthermore, water quality samples taken in 2007 from Jin Ki et al. (2009)[4] measuring nitrogen loads in the Siem Reap River at Angkor and the Tonle Sap Lake came within the range of SWAT estimates.