Michael Cote (left) and (inset, from top) Megan Doherty, Jennifer Norfolk, John Kadyszewski and Mary Grady were among the Winrock International experts who spoke at COP 25.

Mary Grady and John Kadyszewski represented Winrock’s American Carbon Registry (ACR) and the newly launched Architecture for REDD+ Transactions (ART), for which Winrock serves as the Secretariat, at multiple events. Founded over two decades ago as the world’s first private greenhouse gas registry, ACR has issued over 100 million carbon credits under the California cap-and-trade program. At a COP side event, Grady advocated for a strong set of market rules for the international transfers of emissions reductions between countries and for the global U.N. carbon market.

ART aims to unlock new, large-scale financing for sustainable land use and forest conservation, which has the potential to reduce 7 billion metric tons of CO2 annually by 2030. In a panel moderated by ART board chair Frances Seymour, Grady and Kadyszewski joined the executive director of the Emergent Finance Accelerator to elaborate on how the structure of ART and Emergent can bring finance at scale for tropical forest protection.

COP25 was also the venue for a signing ceremony in which ministers from Norway, Germany, the U.K. and Colombia agreed to extend an initial agreement signed in Paris in 2015 for results based payments to Colombia for efforts to reduce deforestation. The Joint Declaration of Intent referenced ART as a mechanism to assure achievement of results. 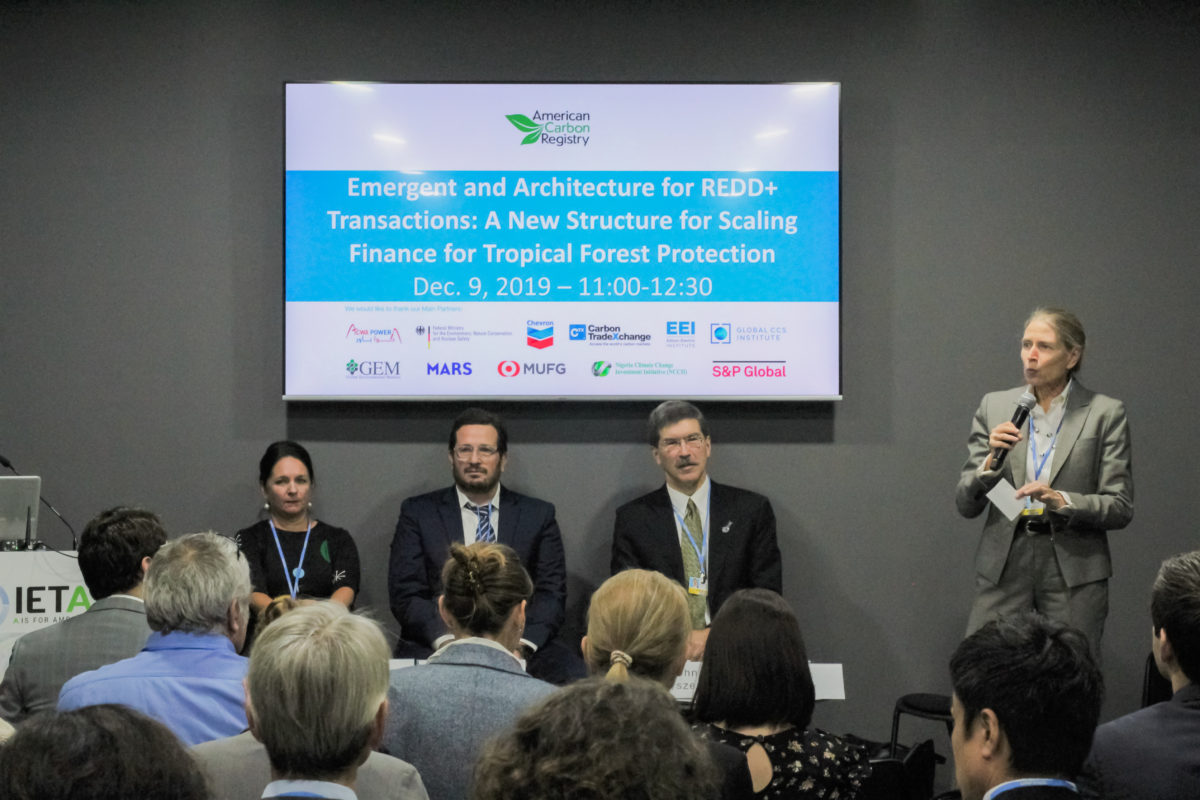 Winrock experts also spoke on climate adaptation efforts, including work to protect and expand mangrove forests along vulnerable coastlines in Bangladesh through the USAID Bangladesh Climate Resilient Livelihoods and Ecosystems project. “We married local indigenous knowledge with scientific data so that we could identify climate risks and develop appropriate adaptation recommendations,” said Winrock’s Jennifer Norfolk. “The forests of Bangladesh are one of the greatest assets that we have against flooding. We must engage communities in protecting their forests.”

Winrock worked with over 12,000 Bangladeshis across 824 villages and multiple government agencies to assess climate risk and identify actions to strengthen resilience at the local, regional and national levels. Villages were selected based on their proximity to fragile ecosystems and the number of people engaged in firewood collection and other natural resource extraction. Winrock prioritized women and youth because they are more likely to depend on natural resources and are therefore most exposed to climate risk. Seventy percent of those who identify themselves as more resilient following the project are women.

At the Bangladesh pavilion, Winrock’s Jennifer Norfolk spoke about how Winrock’s CREL project identified effective adaptation actions by assessing climate vulnerability through a participatory process that prioritized inclusion of women and youth.

Not all adaptation interventions require large-scale financing, and village-level recommendations were some of the most actionable and financially attainable. One successful outcome is the implementation of a megaphone weather alert system. Previously, many of the most vulnerable people did not receive alerts, which were only available via radio, television and social media. The megaphone system is a low-tech innovation that provides alerts to all.

While megaphones are relatively affordable, infrastructure and supply chain adaptation are not — and governments around the world are struggling to finance climate adaptation. Engaging the private sector in adaptation planning and financing was a defining theme of COP25. Winrock’s State Department-funded Private Investment for Enhanced Resilience (PIER) project has 15 activities in four countries that are crafting solutions to address an enormous gap in financing.

“Currently, adaptation finance only accounts for 6 percent of global finance,” said Anmol Vanamali. The total cost of global climate adaptation could range from USD $150 to $300 billion by 2030, up from about $30 billion in 2020. This gap will require a 500- to 1,000-percent increase in financing in just 10 years.

In Ghana, cocoa farms are being affected by increasing temperatures, soil degradation and aging cacao trees that no longer produce the same quantity and quality of cocoa. Farmers have the on-the-ground knowledge to switch to a more climate-resilient variety of cacao tree but lack the access to finance to replant and sustain their livelihoods during the replanting transition.

Winrock is working with cocoa farmers, the Government of Ghana, Hershey’s and ECOM — one of the largest cocoa traders in the world — to identify strategic investment opportunities for ECOM to rehabilitate cocoa farms so the chocolate market can continue without disruption.

Together, we are developing a financial model to increase access to finance for farmers so they can replant more resilient cocoa trees along with other complementary crops in an intercropping system that can sustain their livelihoods during the transition. The resilience of ECOM’s supply chain and the long-term resilience of cocoa-producing communities can be strengthened simultaneously. 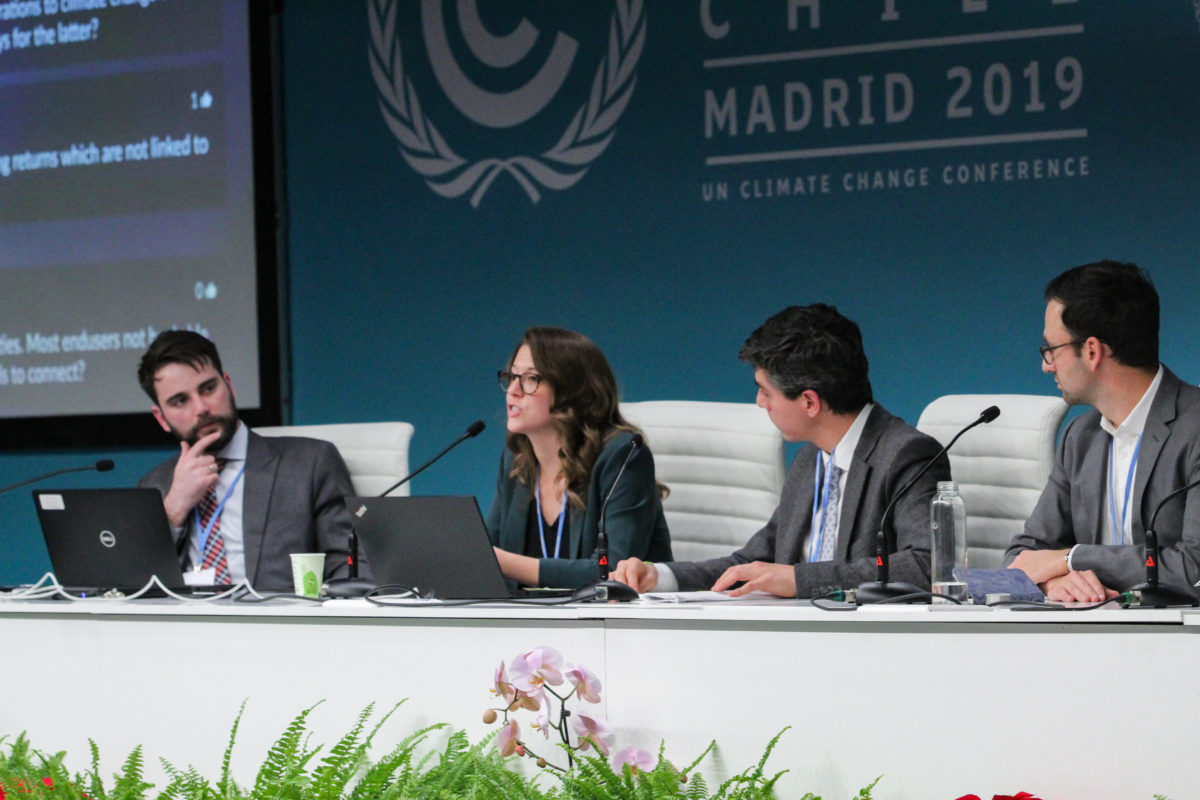 “This example is particularly important because companies could see this sort of risk and pull out and get their cocoa elsewhere,” said Winrock’s Meghan Doherty. “But instead, here we have a company that’s interested in investing in a community … and making their supply chain more resilient, which allows for finance to continue flowing.” PIER pilots are happening in four countries now — Ghana, Indonesia, Peru and Vietnam — and are scalable to others.

“By equipping companies and financial institutions to utilize climate data and identify strategic investments in resilience, we can reframe adaptation as an investment opportunity,” said Doherty.

COP 25 may not have produced the worldwide consensus that was hoped for, but it did underline the need for increased ambition and innovation for both mitigation and adaptation. Winrock is helping communities, companies and countries strengthen resilience — and seize new opportunities for growth.