State and regional governments in Latin America have detailed plans to significantly reduce carbon emissions. Others should follow and take climate action.

In a few days, nations across the globe will convene at the 26th U.N. Climate Change Conference of the Parties (COP26) in Glasgow to accelerate actions to meet the goals of the Paris Agreement and keep global warming below 2 degrees Celsius, and preferably below 1.5 ⁰C.

The outcomes of COP26 will be critical, especially in light of the findings of the Intergovernmental Panel on Climate Change’s recent Sixth Assessment Report: The Physical Science Basis. Those findings present a dire warning, based on the most up-to-date physical science, that transformational change is essential to avoid the most catastrophic effects of climate change. The report finds that global surface temperatures have risen approximately 1.1 ⁰C since pre-industrial times, and are expected to reach 1.5 ⁰C within the next 20 years. To limit warming to 1.5 ⁰C  and avoid the associated additional negative impacts, “immediate, rapid, and large-scale reductions” in greenhouse gas (GHG) emissions are necessary.

That’s where the Climate Pathway Project comes into play. This project was financed by Norway’s International Climate and Forests Initiative, managed by The Climate Group, and implemented under the technical coordination and leadership of Winrock International, with expertise from the Center for Climate Strategies and partners including the Governors’ Climate and Forests Task Force, World Wildlife Fund, Reforestamos Mexico and and Libélula. The Climate Pathway Project assisted six state and regional governments in Latin America to develop long-term plans, or pathways, to reduce GHG emissions in different sectors and to enhance removals at scale, while promoting continued socio-economic development opportunities. Subnational governments play key roles in implementing public policies and promoting change at a more localized level, fulfilling an important role in helping to meet national commitments under the Paris Agreement. 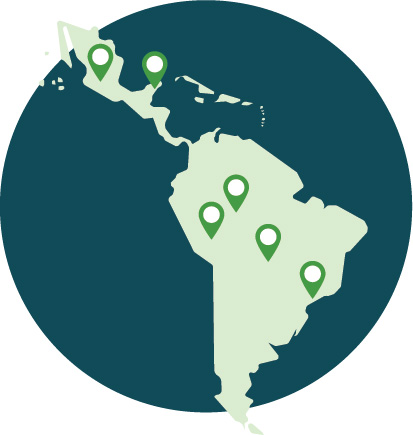 The participating subnationals included the states of Amazonas, Mato Grosso, and São Paulo in Brazil; Querétaro and Quintana Roo in Mexico; and Madre de Dios in Peru. In the decarbonization pathways, these states and regions each elected a suite of priority actions to reduce net GHG emissions while also maximizing socio-economic and environmental benefits.

The scope of these actions varied significantly, from improving energy efficiency, strengthening land tenure rights, combating deforestation and optimizing industrial processes, to restoring forest cover in the productive agricultural landscape. Implementing all priority actions determined by the six participants and their stakeholders is expected to lead to emission reductions of 339 million tonnes of carbon dioxide equivalent (CO2e) in 2030, a 53% reduction compared to the “business-as-usual” (BAU) scenario, and reductions of 735 million tonnes in 2050, an 87% reduction compared to the BAU scenario. 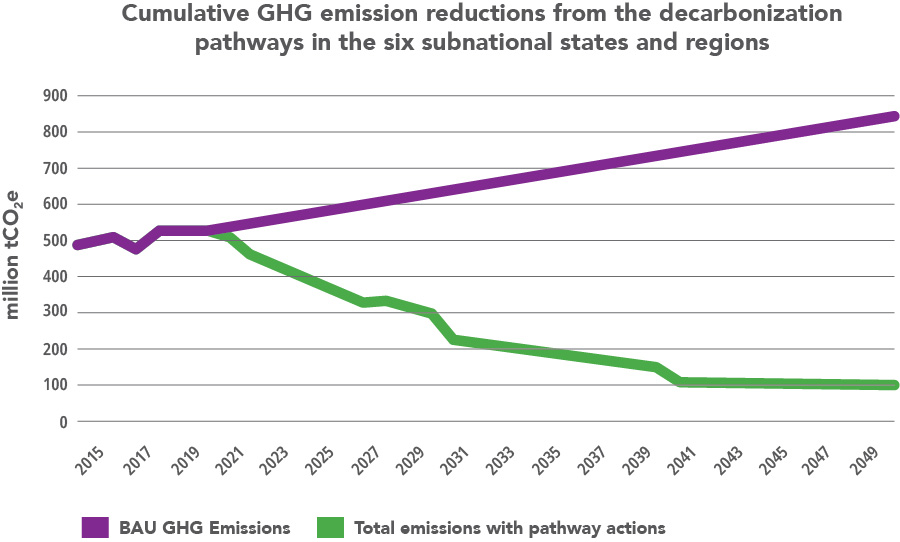 While these projected emission reductions are a fraction of the total ambition needed at the global level, the project provides an important framework to guide subnational jurisdictions and other stakeholders in development of their own tailored decarbonization pathways. More governments and private sector entities are making commitments to reduce or even achieve net zero emissions. To turn commitments into reality however, they must continue to define their decarbonization pathways, refine plans for achieving them, and begin implementing those plans. This is a substantive undertaking that requires cooperation and organization across diverse stakeholders and high levels of expertise.

With the Climate Pathway Project, Winrock and its partners demonstrated that it can be done. More subnational and national governments must follow the lead of these six states and regions and develop their decarbonization pathways; the lessons learned under this project provide a strong foundation to do so.

For more information on the Climate Pathway Project including reports and updates, click here.